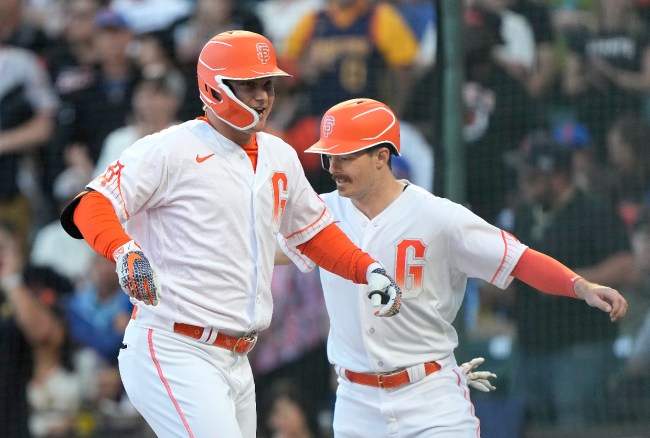 The San Francisco Giants won a thrilling slugfest against the New York Mets on Tuesday night, and Joc Pederson was the main reason why. Pederson smacked three home runs and drove in eight to pace his way to a historical night.

After the game, Pederson revealed what gave him the motivation — it was a pregame conversation with Giants legend Barry Bonds.

“Barry Bonds was here and he talked to me and Lamonte Wade for quite awhile…it just freed my mind up. The way he talks about hitting helped me out a little bit. I’m still a little speechless processing it all.”

Bonds apparently gave Pederson some pointers, and it must have worked because it immediately translated to the biggest night of Pederson’s career.

But, MLB fans were quick to suggest other ways Bonds influenced him.

Bonds is a well-known name for MLB fans everywhere. Yes, he was one of the best hitters during his time and the Home Run King. But, the steroid scandal will always loom over his head regardless of how things end up.

Translation; He’s been juicing with Bonds.

Dude has to be juicing, there’s just no way

Of course, Bonds has a way with words and was a world-class hitter even before the steroid issues came to light.

Barry Bonds-hands down best hitter to ever play the game of baseball. Joc, maybe he's going to get to that place Barry stayed his whole career. https://t.co/dURmxByh5j

Barry Bonds-hands down best hitter to ever play the game of baseball. Joc, maybe he's going to get to that place Barry stayed his whole career. https://t.co/dURmxByh5j

Others even called for Bonds to be hired as the hitting coach, and some suggested Pederson might be due for a drug test from the MLB after this once-in-a-lifetime performance.

There will always be mixed reactions whenever Bonds’ name is brought up, but nonetheless, whatever he said to Pederson worked wonders. The Giants won 13-12, and Pederson was nearly a one-man show on Tuesday evening in the Bay Area, and maybe Bonds should come around the Giants locker room more often.