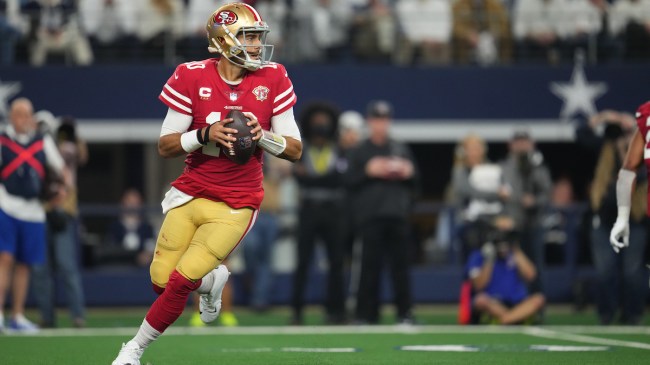 In a surprise turn of events, Jimmy Garoppolo is staying with the San Francisco 49ers.

When the 49ers drafted Trey Lance with the third overall pick in the 2021 draft, most thought it was the beginning of the end for Garoppolo’s time in SF. The team made him available for trade in the off-season and even thought he’d end up with the Seattle Seahawks. However, it appears there’s been a change of heart.

On Monday, a day before the NFL’s 53-man roster cutdown deadline, it was reported that the 49ers were finalizing a deal to make Garoppolo not only the most handsome backup quarterback in the league but also the highest paid.

The #49ers lowered Jimmy Garoppolo's base salary to $6.5M fully guaranteed while giving him a chance to make nearly $10M more in incentives if he's starting. A solid solution. https://t.co/la4T5rNpir

With no trade partners materializing, many expected the 49ers to cut Garoppolo to save over $25 million in cap space. Instead, the two parties agreed to a restructured one-year deal worth $6.5 million in base salary.

The deal also includes no-trade and no-tag clauses with $500k in roster bonuses and up to an additional $9 million if he starts, per Adam Schefter. It’s a short-term solution that keeps Garoppolo in SF but gives him the freedom to leave in 2023.

While Garoppolo remains in the red and gold, for now, there’s always a possibility that he’ll join another team later in the season. Given his current destinations are likely teams who will struggle, it’s in his best interest to wait.

Ultimately, the announcement still comes as a definite surprise. Garoppolo underwent shoulder surgery and didn’t even practice with the 49ers during his recovery. Clearly, some fans weren’t thrilled by the team’s decision to keep its former starter.

In a vacuum, you can absolutely make a case for the Niners keeping Jimmy G as an extremely overqualified backup, assuming the money isn't crazy. But…it's not a vaccuum. 🥴

I don’t care how the 49ers spin it, bringing Jimmy G back is not a good thing for Lance or the belief they have in him right now.

Of course, other fans had more faith in Jimmy G’s winning record. He led the 49ers to a Super Bowl and NFC Championship appearance recently after all.

Jimmy Garoppolo staying with the 49ers was the best thing FOR HIM AND THE TEAM. There are no starting spots or better paying back up spots at this point. Nice to have the guy who took you to a Super Bowl as your back up ready to step in if anything happens to Trey Lance.

Jimmy G played so well without knowing the playbook in 2017, smart move by the 49ers to keep him out of QB meetings all camp.

With the NFL season drawing near, the 49ers will hope Jimmy G’s days of ghosting are behind him. Trey Lance has a long road ahead and he’ll need guidance from his new backup quarterback.