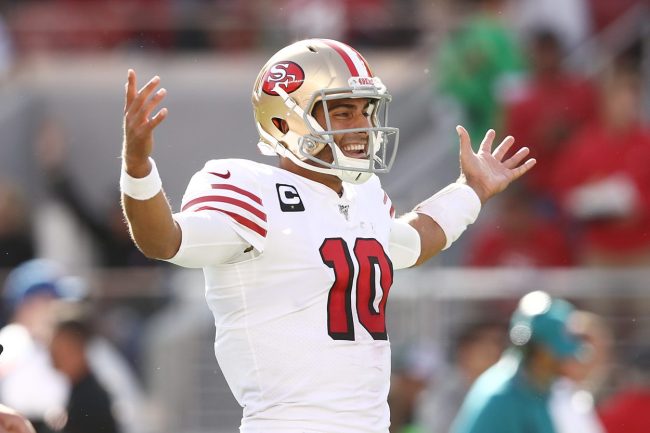 Jimmy Garoppolo’s days as a member of the San Francisco 49ers are numbers. General Manager John Lynch and Head Coach Kyle Shanahan gave the quarterback, who helped lead the Niners to the Super Bowl in 2019, permission to seek a trade earlier in the offseason.

There’s no shortage of suitors for Garoppolo’s services, either, with the Cleveland Browns being the one team in particular that could be in the mix for the veteran.

Jimmy Garoppolo Ghosts The Niners In The Offseason

But Garoppolo’s stay in San Francisco may well have been doomed from the very start. According to a report by Mike Silver of the San Francisco Chronicle, Garoppolo “disappeared” from the team during most offseasons. Most notably, the report claims that the Niners couldn’t their star QB for “weeks and weeks” after signing him to a gigantic four-year, $137.5 million deal in 2018.

Will Trey Lance shine in 49ers' spotlight as Jimmy G. disappears one last time? So glad to see @mikesilver aboard as a new @sfchronicle columnist. Great insights from his reporting here https://t.co/6xAKFSpxku

Garoppolo had a career-best in 2019 following the extension. He started all 16 games for San Francisco, throwing for nearly 4,000 yards and 27 touchdowns. The Niners went 13-3 in the regular and Garoppolo helped lead the team to the Super Bowl.

But there were whispers about Shanahan’s lack of trust in his starting QB along the way. Garoppolo thrrew just eight passes in the NFC Championship Game win over the Green Bay Packers. He then threw for just 221 yards, one touchdown and two interceptions in the Super Bowl loss to the Kansas City Chiefs.

He started just six games due to injury the following season and San Francisco selected Trey Lance with the third pick in the 2021 NFL Draft. That appeared to be the writing on the wall for Garoppolo, who was solid, if unspectacular, in 15 stars a year ago.

It turns out the New England Patriots' offensive struggles are a true team effort. https://t.co/K8Nj7elwNc

Now Lance is penciled in as the Niners’ starter and impressing early on. What lies ahead for Garoppolo looks like a very big unknown, and these new reports won’t help his stock.