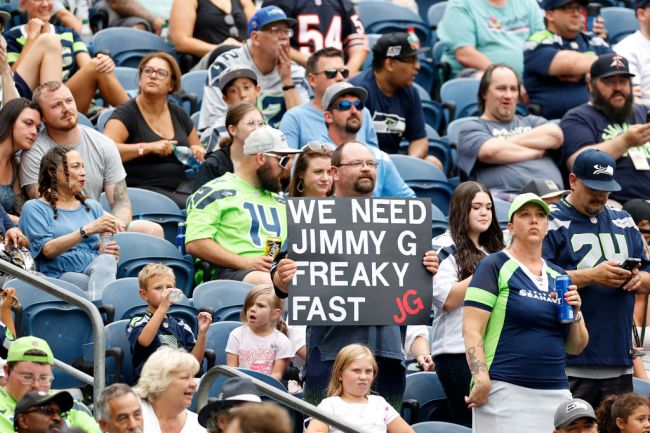 With the NFL’s 53-man roster cutdown deadline approaching, Jimmy Garoppolo’s time on the San Francisco 49ers is finally coming to an end. It appears the team already has an idea of where their former starting quarterback will end up too.

When the 49ers named Trey Lance as their new starter, the team planned on trading away Garoppolo during the offseason. Unfortunately, it was easier said than done. Garoppolo underwent shoulder surgery and teams weren’t exactly intrigued by his massive $25 million contract.

The 49ers are now expected to release him come August 30th to save space on the salary cap. In doing so, Garoppolo will be free to sign with whomever he desires. While recent rumors had linked him to the Cleveland Browns, it seems the 49ers organization thinks he’ll be much closer.

"I know around the 49ers that they think [Jimmy Garoppolo] is going to be ending up in Seattle."

The Seahawks will struggle at this rate in the already stacked NFC West. With the NFL season just weeks away, Seattle’s 12th Man has already started calling for Jimmy G’s assistance. He might not be of Russell Wilson’s caliber, but he does have a reputation for winning. It just might be what the Seahawks need to stay competitive.

While the 49ers may expect Garoppolo to end up in Seattle, it’s not a certainty. Maiocco also listed the Miami Dolphins and Cleveland Browns as legitimate possibilities. Of course, the 49ers could keep Garoppolo even longer up until September 10th, but it’s unlikely.

Get your 🍿 ready for Week 1! https://t.co/KrKfzqvVpy

Unless a trade miraculously forms in the next week, expectations are for the 49ers to release Jimmy G by the NFL 53-man roster deadline on August 30th. If he does join the Seahawks, it’ll make for an exciting revenge match during Week 2.