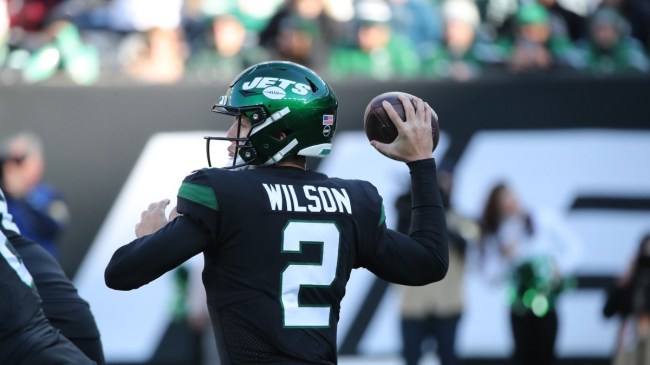 The Jets have had a great season to this point. Expectations for the team were low, because, after all, it’s the New York Jets. But, even after a disappointing 10-3 loss to the New England Patriots on Sunday on a late punt return touchdown, they stand at 6-4. They’re very much in the playoff hunt and a lot of that is due to a fantastic defense that is among the league’s best.

They’ve done it in spite of terrible quarterback play. Zach Wilson missed all of September, but the 2021 2nd overall pick has been terrible in his return to play. Yes, they’ve gone 5-2, but he has more touchdowns than interceptions and has failed the eye test.

He was especially bad on Sunday against New England.

Zach Wilson has to be the worst quarterback in the NFL 😭😭 pic.twitter.com/emBsZUT5N6

In real time, yesterday was awful for Zach Wilson. After seeing the clips out this morning, it was somehow significantly worse.

I know Saleh publicly shot down the idea of a QB change, but you have to think the leash is very short.

If not, he really risks losing that room.

And, to add insult to injury, Wilson seems to be running teammates the wrong way.

Jets teammates are getting frustrated with Wilson’s attitude

According to a report by SNY, teammates are getting fed up with Wilson’s demeanor.

"Sources inside the Jets’ losing locker room told SNY that Zach Wilson was walking around after the game “like he isn’t the problem.”

It rubbed more than a few the wrong way, frustrating several others." (via @Connor_J_Hughes) https://t.co/mhgvtofG6g pic.twitter.com/NOuRLxll42

The article goes on to say:

Wilson’s stance at the postgame news conference wasn’t just to spurn the media. Sources inside the Jets’ losing locker room told SNY that Wilson was walking around after the game “like he isn’t the problem.” It rubbed more than a few the wrong way, frustrating several others.

And that was before his words began to spread like wildfire.

If defensive teammates were ticked off before, it’s not going to get any better now.

This is a tough situation for coach Robert Saleh. He can’t lose his locker room, especially in a season where they can make the playoffs.