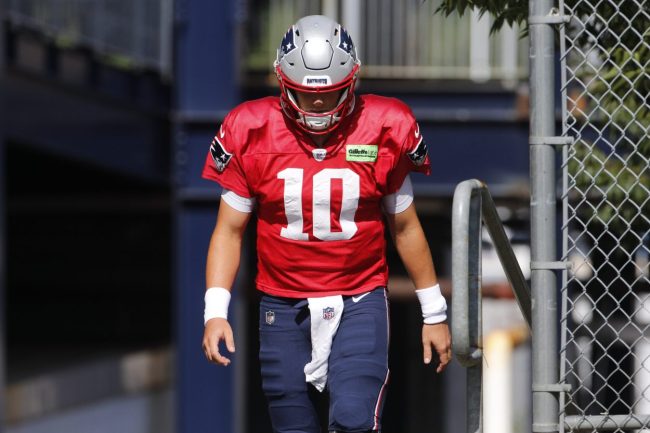 New England Patriots quarterback Mac Jones exceeded most expectations in his rookie season. The Alabama product threw for 3,801 yards and 22 touchdowns in 2021 and finished second behind Cincinnati Bengals wide receiver Ja’Marr Chase in rookie of the year voting.

But now the Patriots, and Jones, have an entirely different task in front of them. Former offensive coordinator Josh McDaniels is now the head coach of the Las Vegas Raiders. And it appears that New England won’t be replacing him. At least not in an official capacity.

With no offensive coordinator in place and no clue who will call the plays in 2022, Jones and the Patriots offense have struggled in training camp. Recent reports have said that the offense “looks broken” and “distressingly bad” with former Detroit Lions head coach Matt Patricia largely involved in that.

A play reflective of a tough day for the Patriots’ offense: To finish 1-on-1s on a “got to have it” play, Mac Jones tries to connect with DeVante Parker in windy conditions — and Joejuan Williams picks it off.

The offense then drops for push-ups. pic.twitter.com/OPKfgSmckk

One would think, then, that the Patriots would want to get Jones as many reps as possible in the preseason before the games begin to count.

According to a report from Mike Greiss and Dan Graziano of ESPN, that’s not the case. Greiss and Graziano reported that Jones, as well as a number of the Patriots’ starters, will not participate in Thursday’s preseason game against the New York Giants.

Former NFL Executive Says The Patriots Are Making A Mistake

Former New York Jets general manager Mike Tannenbaum thinks that’s a mistake. He explained why on ESPN’s “Get Up” on Thursday morning.

.@RealTannenbaum says it's a mistake to sit Mac Jones in tonight's preseason game.

“I would get reps for Mac Jones in a game situation,” Tannenbaum said. “He’s going to be hearing somebody new in his helmet after his rookie year it was Josh McDaniels. To me, again, I would be out there with the first offensive line. Maybe get 15 plays. Get out there, don’t turn the ball over. No pre-snap penalties. You don’t have to be out there a lot. But you want to get some momentum heading into (the) next two weeks (of) preseason.”

No cap, the NFL's rule about hats on the sideline couldn't be any dumber. https://t.co/zy0hnheX4c

Bill Belichick, and his six Super Bowl rings apparently disagree with Tannenbaum. While the former Jets GM appears to have a point, maybe Belichick has an idea or two of what he’s doing these days.