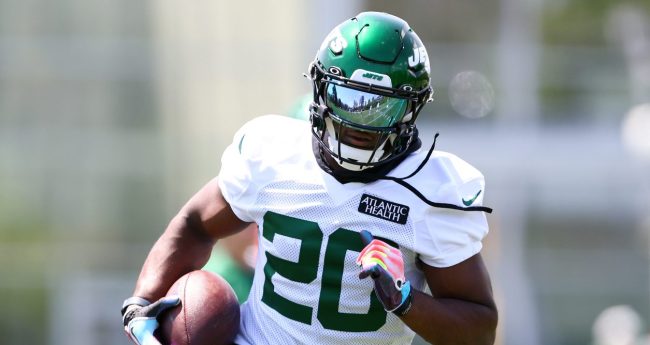 The New York Jets saw quarterback Zach Wilson go down with an injury in their preseason game, although he avoided the worst-case scenario and should be able to return pretty quickly.

Oddly enough, there is still a ton of excitement around the team. On Friday, during a joint practice with the Atlanta Falcons, rookie running back Breece Hall got everybody pumped up with a touchdown. Watch this impressive play by the former Iowa State running back.

That 70-yard touchdown sure caught the attention of everybody — and not just Jets fans.

This guys second level cutting is a joke, unreal how smooth and easy it looks https://t.co/005c6BeQKy

Yes it's practice. But if AVT springing Breece Hall loose for a 70 yd TD doesn't excite you. You're dead inside! #Jets

Breece Hall with a tremendous cut on outside run. Wasn’t touched. Likely would have been a 75-yard touchdown. There’s that “home run” ability Robert Saleh talks about. Haven’t seen RB here do that in awhile #Jets

And this isn’t just against our defense now. Breece Hall is gonna be special 🔥

Hall drew a lot of buzz coming out of Iowa State and was selected 36th overall. He was also the first running back off the board, just a few picks before Kenneth Walker III.

Now, Breece Hall is trying to carve out a prominent role on the Jets offense in a bit of a clunky running back room. Michael Carter, a second-year player out of North Carolina, Tevin Coleman, and Ty Johnson are others listed on the depth chart for now.

However, all signs point to a Carter-Hall duo leading the way in the backfield, and if the rookie continues to make dazzling plays such as these, it will be hard not to play him.

Jets fans, get excited! Your starting running back could be here.