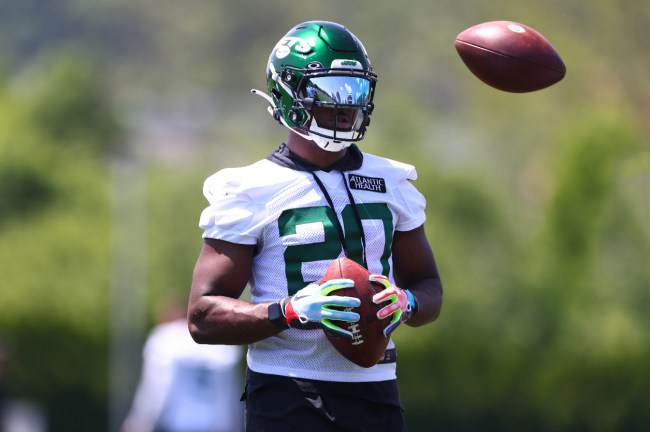 The New York Jets look a lot different this year. The roster is full of young talent across the board, and quarterback Zach Wilson is expected to make a major jump. For some reason, fans are even throwing money on the Jets to win the Super Bowl.

Well, that didn’t last very long. According to Ian Rapoport of NFL Network, Hall and the Jets agreed to a deal.

#Jets second-round RB Breece Hall, who has been in the building all morning, is expected to sign his four-year rookie contract in time for rookies to report today, source said. Their last pick to sign.

It took a while, but the Jets have locked in their second-round pick and now have a talented running back duo of Hall and Michael Carter.

Fans were more than excited about this development, especially when it looked like he was going to be a holdout just a few hours before.

🔒 and ready to rock! LFG https://t.co/bCBLwd1wqc

Fantasy football fans were also excited about this signing, and Hall was the consensus No. 1 pick among rookie drafts this offseason.

Thank god i just traded for him i woulda been wallahi’d https://t.co/52Wi5VzbLU

That 2 hour Breece Hall BuY tHe DiP window was sure fun https://t.co/vgtE3WxgWZ

After selling for a future 2nd earlier today, now attempt to buy back for a future 1st https://t.co/1ywmhN7DP0

It went from panic mode to pure joy for Jets fans.

Breece Hall was electric at Iowa State and came into the 2022 NFL Draft as one of the best at the position, with many saying he is the No. 1 RB of the class. Let’s see how he does in his rookie campaign.