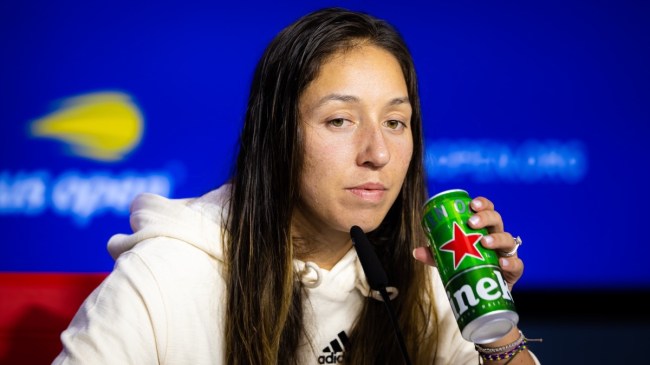 Jessica Pegula, daughter of Buffalo Bills’ and Buffalo Sabres owner Terry Pegula, found herself in a predicament after her 6-3, 7-6 loss in the quarterfinals of the US Open. She was sad and she had been informed she needed to take a normal doping test. She found a good solution for both, as she pulled up to her press conference with a beer in hand after her heartbreaking loss to top seed Iga Swiatek.

.@JLPegula is all of us after a hard day’s work 😂🍺 pic.twitter.com/VhnC5hQTLT

Pegula had good reason to drink

It was a match the highest-ranked American could’ve won. Pegula led 3-2 in the first set and had a break point to make it 4-2, but couldn’t close it out and Swiatek took the set 6-3.

Pegula found herself down a break at 5-4 in the second set but heroically broke serve with her back against the wall to bring it to 5-5. She led 2-1 early on in the second-set tiebreak but lost the tiebreak 7-4 to a red-hot Swiatek.

Couple that with a random doping test request, and Pegula could speed up that process as well as help herself deal with the loss, according to the New York Post.

D’Arcy Maine of ESPN.com noted the drink, saying, “Hi, Jessica, sorry about the loss,” before adding “I like the Heineken.”

“Thanks,” Pegula said. “I’m trying to pee for doping — although it does help ease the loss.”

Jessica Pegula has had the best season of her career

The 28-year-old was a late bloomer in women’s tennis, not cracking the top 100 until she was 24, in 2019. But, the daughter of NFL royalty has continued to improve, climbing up into the top ten in the world this year and taking over the mantle of the top-ranked American on tour. She made the quarterfinals at three of the grand slams this year and is now one of the biggest threats on tour.

Let’s hope her father’s Buffalo Bills are only drinking Heinekens to celebrate after tonight’s Rams-Bills game.