New Video Has Emerged Of The Alabama-Tennessee Jermaine Burton Incident 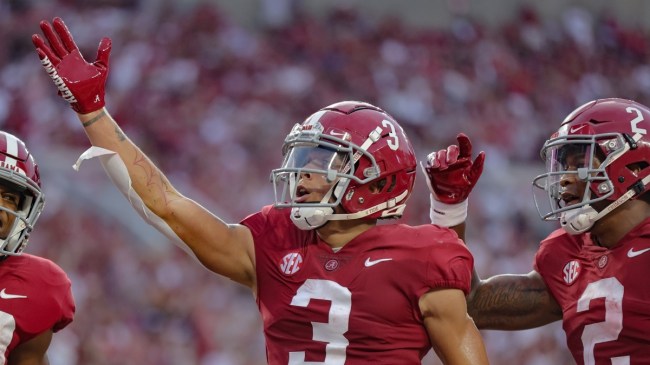 It was a night of dreams for Tennessee fans when they beat Alabama 52-49 earlier this month. It was the Vols’ first win over their longtime rival since 2007, and signified the official return of a powerful Tennessee Volunteer football program. Quarterback Hendon Hooker was phenomenal, Jaylin Wyatt caught five touchdowns, and the defense hung on for dear life down the stretch to set up the game-winning field goal.

But, an incident that happened right after the game has been in the news since. A video surfaced after the game and Vol fans alleged that Alabama wide receiver Jermaine Burton struck a Tennessee fan as the Volunteer faithful stormed the field.

The amount of people defending Jermaine Burton for his actions is alarming, most of them being Alabama fans. Their team loses and NOW storming the field is an issue.. pic.twitter.com/0mWSsJ7PyG

But, Burton was not suspended by Alabama. After all, a lot was happening, and it can be a scary situation for opposing players when the field is being stormed.

“I don’t know how many of you have ever been in a situation like that, but I talked to him,” Saban said after the 30-6 win. “He was scared. I was scared. Some of our other players were scared. I think you learn to respect other people because we have a responsibility to do that regardless of the circumstance that we’re in.”

But, new video has come out that may complicate the case.

On Thursday evening, a video found its way to social media that purports to show the incident from a different angle with a little bit more of an extended look at the situation.

Jermaine Burton sure looks “scared” in this latest video. He just couldn’t help himself from extending his hand and hitting this woman because of this frightening situation… pic.twitter.com/ct6GbbOqSh

I won’t get into what I think or didn’t think happened, but you can view it for yourself. Burton is walking in the bottom middle of the video.

Tennessee fans are fired up

Tennessee fans and other college football onlookers are understandably fired up about the new video.

Fox Sports’ Aaron Torres had quite a strong opinion on the ordeal.

We have new video on Jermaine Burton, and what's indisputable, is what anyone with a brain has argued for weeks:

He wasn't "scared." This wasnt accidental. And if Nick Saban did what's right – rather than prioritize winning – Burton wouldn't be in a Bama uniform for a while https://t.co/WnOwCGCcf9

The video clearly shows Jermaine Burton unnecessarily taking a swing at a female Tennessee fan at the 19-second mark.

This isn't a "fans shouldn't be on the field" thing. This is a football player taking a swing at a woman, thing.

Up to Nick Saban as to what he does next

Some Vol fans even think charges should be filed.

@UTKnoxville — time to file charges for assault. Check him hitting someone at the 7/8 second mark…

Give it a rest Bama doesn’t need Burton to win.

It will be very interesting to see how this plays out. The teams could meet again, too, in the SEC title game.