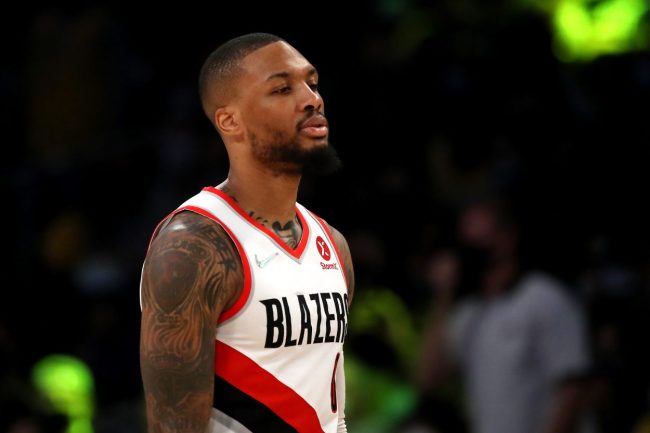 Things haven’t exactly gone according to plan for Damian Lillard in the last year or so. His Portland Trail Blazers are in the midst of a rebuild. He missed almost the entirety of the 2021-22 season while recovering from abdominal surgery. And it appears his attempts to lure Kevin Durant to the Blazers may go unanswered.

But Lillard’s status as one of the superstar players in the NBA remains unquestioned, surely. Though it appears that may no longer be the case if you ask Bleacher Report’s Taylor Rooks and Boston Celtics star Jayson Tatum.

This is such a ridiculous take pic.twitter.com/m1gb0Eqjqe

Rooks sat down with Tatum for a Bleacher Report interview. The conversation eventually found its way to the superstar status of Lillard as well as disgruntled Brooklyn Nets guard Kyrie Irving.

Tatum posed the question to Rooks about whether or not Irving should be classified as a superstar. Both agreed that he should. But then the question turned to Lillard. Rooks was a little bit more non-committal on that answer.

“I think that Damian has all of superstar qualities, but it’s hard to put him in it in this moment because of…he just, like, needs a little more,” she said. “But obviously, like, he has that in him.”

Tatum seemed unsold on the answer.

“I mean he’s gotta win. He’s gotta get there. Like, to me that’s some of it” Rooks said.

Irving does have a ring from his time in Cleveland with LeBron James while Lillard hasn’t advanced past the Western Conference Finals.

The New York Knicks might just be pretty good this upcoming season. https://t.co/Bi6Us96zsJ

But Lillard is a six-time NBA All-Star and a member of the league’s recent 75th-anniversary team. If that’s not a superstar, what is?