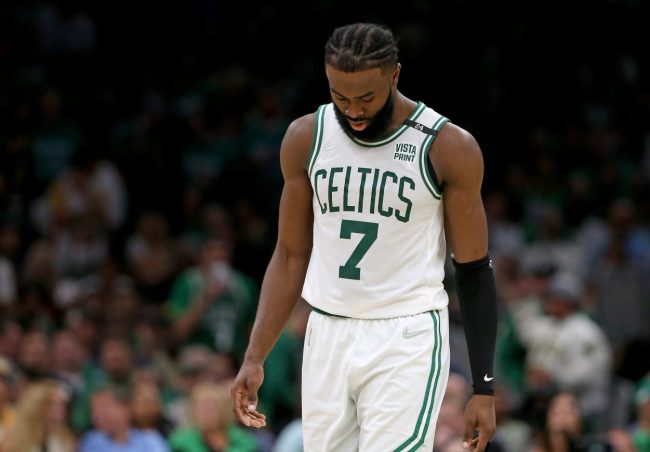 Jaylen Brown had perhaps his best season yet in the NBA in 2021-22. The Boston Celtics wing averaged 23.6 points per game to go along with 6.1 rebounds and 3.5 assists to help lead his team to the NBA Finals.

In the finals, Brown was arguably the Celtic’s best player. The sixth-year player out of Cal  put up 23.5 points, 7.3 rebounds and 3.7 assists in the six-game series against the Golden State Warriors. Brown was so much of a problem that he’s still in the head of Warriors forward Draymond Green.

But apparently Boston can’t value Brown too much. ESPN’s Adrian Wojnarowski put out a report late Sunday night stating that the Celtics are attempting to acquire Brookyln Nets superstar Kevin Durant. Shams Charania of The Athletic then followed up that report. Charania reported that Boston included Jaylen Brown as the centerpiece for its initial trade package, though the Nets want one specific player in addition to Brown.

Needless to say, this didn’t appear to sit well with Brown. The star swingman, who has two years left on his contract at an average of around $27 million, took to Twitter to voice his displeasure.

Short. Sweet. To the point.

One player the Celtics are reportedly refusing to trade is Jayson Tatum. Tatum is seen as a foundational part of the team’s future, despite Brown having a better series against the Warriors. So it’s easy to see why Brown would feel upset.

Sean Marks leaking this just to fracture Brown's relationship with the Celtics would actually be diabolically brilliant https://t.co/OCPKcpHM5g

Celtics downfall I been praying on this for months https://t.co/AByo3sGRvk pic.twitter.com/7iU4lGk6hm

The Celtics have now backed themselves into a corner. Brown’s unhappiness gives the Nets more leverage in trade talks. While Boston will have to deal with an unsettled star player if a trade doesn’t get done.