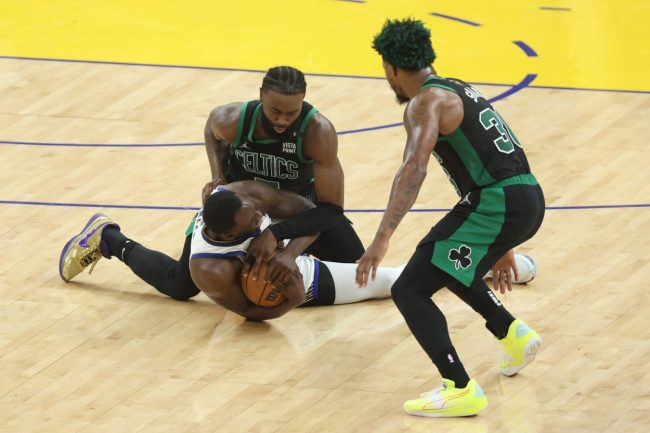 Jaylen Brown and Draymond Green don’t seem to like each other very much.

In fact, outside of his teammates, nobody seems to like Draymond Green all that much.

Green doesn’t care. The Warriors forward is four-time NBA All-Star, four-time NBA champion and the 2017 NBA Defensive Player of the Year. And he likes to run his mouth.

Green went on JJ Redick’s Old Man and the Three podcast recently and had this to say about Brown and the Boston Celtics.

.@Money23Green reflects on getting chippy with Jaylen Brown during the #NBAFinals.

“When Jaylen Brown went in the media and said ‘he tried to pull me shorts down’ I knew I took this heart,” Green said of an altercation between the two in the NBA Finals. “…He said ‘we are not afraid of the Golden State Warriors.’ I sent it to our team in a group chat and said ‘we are afraid of the Golden State Warriors.’ Because nobody asked you are y’all afraid of us. Why the fu*k are you talking about that?”

Brown was unsurprisingly not a fan of the comments, and he took to Twitter to fire right back.

You can say whatever win you win 🌽Draymond got a Podcast and lost his dam mind ..you could never https://t.co/sBfq1FdA5T

Both the Celtics and Warriors are well position to return to the NBA finals in the foreseeable future. If they do, it’s sure to serve up plenty of drama between two teams that do not like one another.