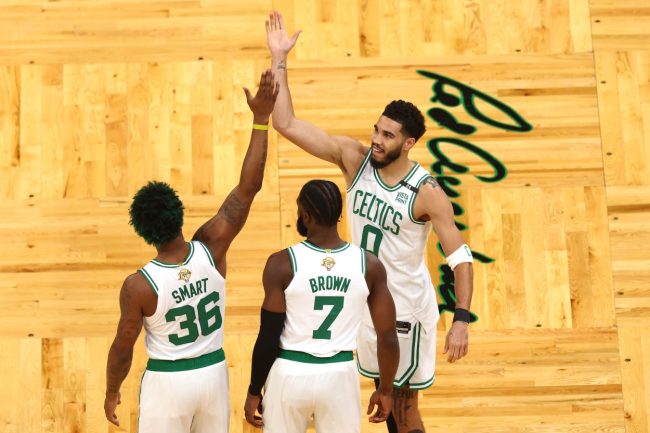 Jaylen Brown wasn’t at all happy with the Boston Celtics following reports that the team attempted to trade him for Brooklyn Nets superstar Kevin Durant.

At least, that’s what Brown’s tweet would seem to indicate following the rumors.

Whatever tensions there were then between Brown and the Celtics seem to be water under the bridge now. An anonymous NBA executive recently said that he believes Brown is “all-in” on the Celtics going forward.

“I think he’s all-in on Boston. From everything I’ve been told, Jaylen’s a loyal guy.” https://t.co/7rMnFvdZ1r

Brown All-In On Boston Despite Rumors About Being Traded

Steve Bullpett of Heavy.com spoke with a number of people across the league to discuss the state of the Celtics’ trade talks for Durant. Though each believed that Boston is still trying to land the superstar, one source isn’t worried about whether Brown is bought in should a trade not happen.

“I think Jaylen IS long term,” this latter source told Heavy. “If they want him long term and they’re going to pay him the contract he deserves, I think he’s all-in on Boston. From everything I’ve been told, Jaylen’s a loyal guy. I know frustration can happen when things aren’t going well, and I think we saw some of that earlier in this past season.”

“But when you take a step back and look at things, I think he wants to be there. And any problems that could ever happen with that relationship would probably have to come from him getting the idea that they’re not in on him. And right now I don’t see that from the Celtics. I think they know what they have in Jaylen — now and for the future — and they want to keep that going.”

Boston is still considered the favorite to land Durant. Though an Eastern Conference rival has also emerged as a contender for the superstar.

If KD does end up elsewhere, it appears Brad Stevens and Ime Udoka won’t have to worry about repairing their relationship with Brown.