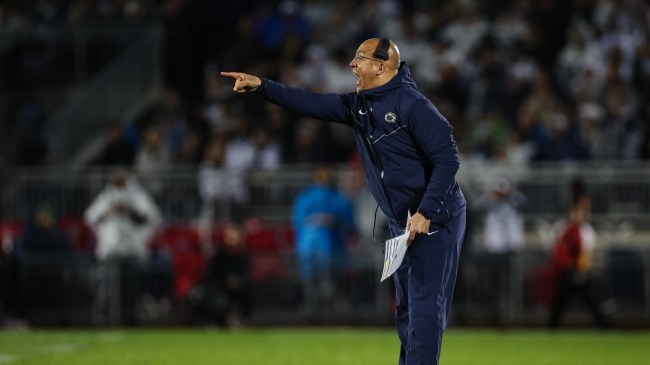 Penn State beat the absolute boogers out of Marlyand on Saturday, 30-0. The Nittany Lions held the Terps to just 134 yards of total offense as they racked up 413 yards in a downpour at Beaver Stadium. Maryland quarterback Taulia Tagovailoa was atrocious, and was sacked seven times and was just 11/22 for 74 yards. It’s another embarrassing loss in November for a Maryland program that has been brutal in the month. And, it’s a good win for James Franklin and his team as they now need to beat Rutgers and Michigan State to get to 10 wins and a likely NY6 bowl.

But, all of that is not what people are talking about. Rather, it’s a scene that I’m not sure I’ve ever seen on the sidelines in a college football game.

James Franklin did push-ups after being flagged for unsportsmanlike conduct

Late in the 2nd quarter, with the score already 21-0 in favor of Penn State, James Franklin started yelling at his offense after a play that wasn’t executed. The refs thought he was yelling at them, and he was flagged for unsportsmanlike conduct. According to the coach, it was his first in twelve years as a head coach.

James Franklin regarding his in-game pushups: Said the officials thought he was yelling at them but says he was actually yelling at his own players. Said it's his first penalty in 12 years.

So, just as his players have to do when they get an unsportsmanlike penalty, he did some pushups.

Penn state will go on the road to play Rutgers next weekend. They will continue their push towards a New Years’ Six game.