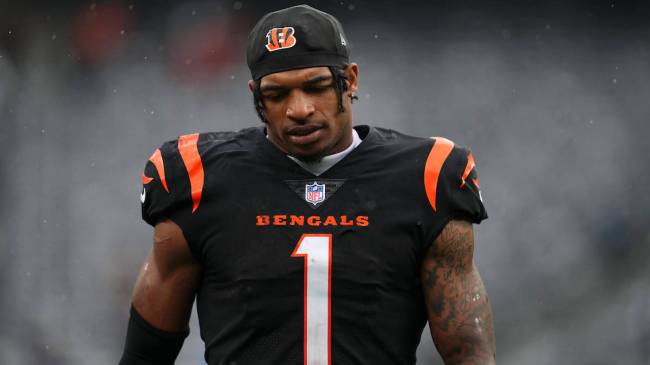 The Cincinnati Bengals are in a bit of a groove after a historic performance from Joe Burrow in their win over the Atlanta Falcons. Unfortunately, it appears they’ll now have to manage without one of their star wide receivers for the foreseeable future.

Despite recording 130+ yards and 2 TDs in back-to-back weeks, Ja’Marr Chase hasn’t actually been fully healthy. The Bengals’ star wideout first injured his hip in Week 6 against the New Orleans Saints before reaggravating it in Week 7 against the Atlanta Falcons.

On Thursday, ESPN’s Adam Schefter reported that Chase is expected now to miss 4-6 weeks due to the injury. While he’s still seeking second opinions, the current timeline could land him a stint on the IR.

Bengals’ WR Ja’Marr Chase is dealing with a hip injury that is expected to sideline him 4-6 weeks and makes him a prime candidate for injured reserve, per sources. Chase visited with a hip specialist Wednesday and is seeking more answers about his injury.

It’s the crushing blow for the Bengals offense that was finally looking like Super Bowl contenders once again. Burrow and Chase have also been one of the most exciting and productive QB-WR duos in the entire league.

According to ESPN Stats & Info, they’ve connected for an NFL-high 7 TDs on passes 20+ yards since 2021. So while there is good news in that Chase will avoid surgery, the team will certainly miss his production.

Bengals Fans Are Heartbroken By Injury To Star Wide Receiver

There are plenty of Bengals fans who are devasted by the injury update. It’s got some even wishing they could offer up their own hip in replacement.

Ja’Marr Chase can have my hip.

Of course, fantasy football managers are taking the news hard too.

Me after taking Ja'Marr Chase out of my lineups: pic.twitter.com/772RcnB1nF

Some fans are remaining optimistic though. Chase would miss matchups against the Browns and Panthers in a best-case scenario. With the Bengals’ bye in Week 10, there’s potential he could return by Week 11 against the Steelers.

Thinking optimistically, Chase could miss just two games here and return Week 11 for a divisional matchup against the Steelers

However, it seems more likely the Bengals will be cautious with Chase’s recovery. He would miss at least the next four games if placed on the injured reserve list.

If he were to remain sidelined for six weeks, he’d also miss a fifth game in Week 13 against the Chiefs.

If Bengals’ WR Ja’Marr Chase is placed on injured reserve, he would miss at least the next four games: Monday night game against Cleveland, then matchups vs. Carolina, Pittsburgh and Tennessee.

Everyone is hoping Chase will make a speedy recovery and return to the field sooner rather than later. The Bengals will need to find ways to win without him until them, starting on Monday against the struggling Cleveland Browns.