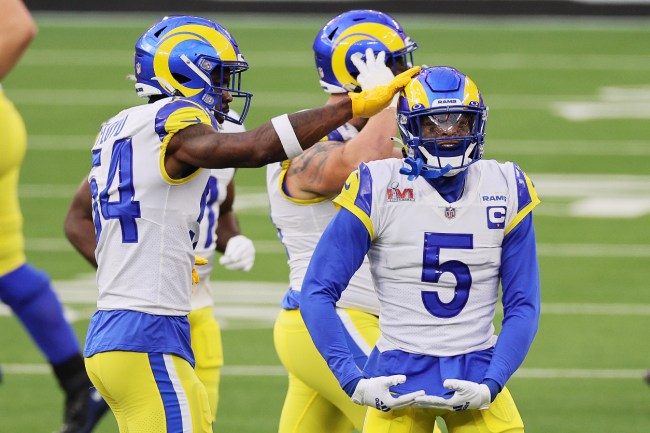 Los Angeles Rams star Jalen Ramsey has been one of the best defensive players in the league since he entered the NFL. With the Jacksonville Jaguars, Ramsey was a monster on the field. He earned two Pro Bowl nods and a First-Team All-Pro before getting traded to the Rams.

In LA, Ramsey has been nothing but spectacular. He has made the Pro Bowl in all three seasons he has been with the Rams, including the 2019 campaign when he was traded midseason. He also has two First-Team All-Pro nods since joining the Rams.

Jalen Ramsey Ignites Hall Of Fame Discussion With One Tweet

Ramsey’s resume is impressive, and the Rams star got everybody into a Hall of Fame discussion by firing off one simple tweet.

Stack up my first 6 years in the league to ANY corner in HISTORY! 3x 1st team All Pro & 5x Pro bowler… who else did that? 👀

Ramsey definitely has a point: His resume is one of the best of all time up until this point. But, some fans — and even former cornerback Aqib Talib — responded to Ramsey’s statement.

AND YOU WAS THAT DUDE TOO! I just want people to start respecting greatness all around.

The argument is definitely valid from Ramsey, and NFL fans used legends such as Darrelle Revis and Deion Sanders as examples.

Honestly, you probably have to go back to Deion to find something comparable. https://t.co/QNTEyNGagr

Rod Woodson didn't start as a rookie but in his next six seasons he had 5 Pro Bowls, 4 All-Pros, DPOY. He also returned kicks and punts (led the NFL in kick returning in 1989)

He also led the NFL in INT and made All Pro at a different position at 37 years old https://t.co/ORpfNO51pE

I tweeted this & all the quote tweets is mentioning a guy who is probably a Hall of Famer… 🤝
😂 that’s not an insult how y’all tryna use it. That’s a compliment actually so thank you! https://t.co/QOe05o2wbx

Nonetheless, a lot of fans agree that Ramsey has a Hall of Fame resume.

Best corner in the league. https://t.co/B8OWqYMAxL

There is no denying Ramsey’s greatness this far in his career, and the consensus agrees with the Rams star. Let’s see what Ramsey has in store for the 2022 NFL campaign.