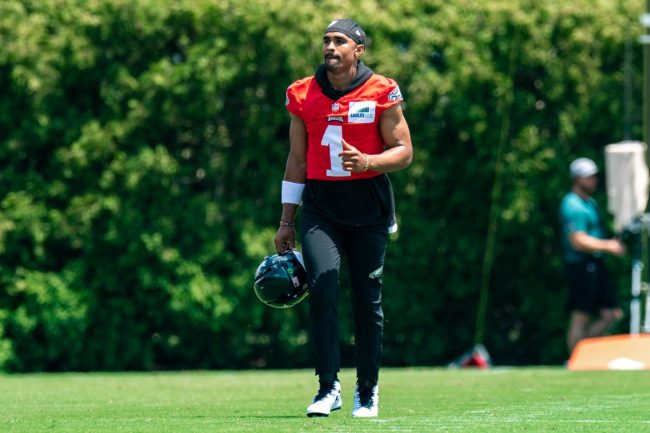 Philadelphians truly do love their cheesesteaks. Trust me.

The only thing they may move love more than their cheesesteaks is their sports teams, especially the Philadelphia Eagles. “Go Birds” is basically the official way to greet people in Southeastern Pennsylvania.

So when starting quarterback Jalen Hurts put out the following video on his Instagram, fans were all about it.

Hurts may be cool under pressure on the field, but he’s clearly adapting to the pressures of working in the kitchen. On Wednesday, the QB went just outside the city to Foodchasers’ Kitchen to learn how he could make a good Philly cheesesteak on his own.

Anybody will tell you, a quality steak is all about good ingredients. Get a good roll (preferably Liscio’s), some nice shaved ribeye and the right cheese (Cooper sharp or provolone, though whiz is solid) and you’re in business. The video makes it hard to tell if Hurts is an onion guy, but he did get the flip down at the end!

Needless to say, Philly fans approved of the lesson and the execution.

I love him and I don’t care who knows it https://t.co/jSCj9R4m2s

This is a heavier than optimal chop on the steak but we're still winning it all with this kid. https://t.co/hbxgQbWgd0

If he can put it together on the field, oh man we got a keeper

Though there was some criticism of the technique.

No! You were close to taking it off the grill right. You lift it into the roll, not put the roll on top and flip it over. That way the cheese goes through, not just up against the roll..

Hurts previously stated that Larry’s Steaks in Northeast Philly is his favorite due to Kobe Bryant’s affinity for the shop. But if he keeps refining that technique, he may have to open a shop of his own after his playing career.