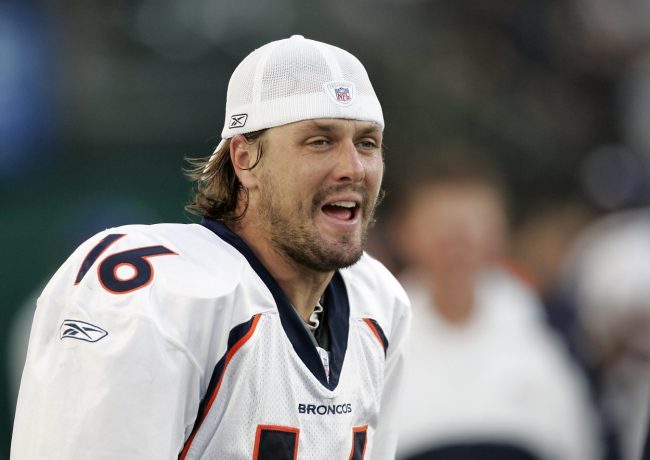 Jake Plummer’s NFL career was a long and winding one. The Arizona Cardinals selected the Arizona State product with the 47th pick in the 1997 NFL Draft. Plummer then started at quarterback for the Cardinals for six years before signing with the Denver Broncos as a free agent in 2003.

Plummer’s Broncos career wasn’t much to write home about. But he had the best year of his career in 2005 when he threw for 4,089 yards and 27 touchdowns, making his only Pro Bowl in the process.

The NFL journeyman retired in 2007 after being traded to the Tampa Bay Buccaneers. But that’s only the beginning of his story.

Since then, Plummer has become an avid handball player who even hosted his own pro invitational in 2008. He’s a strong advocate for the use of medicinal marijuana and spoke out about the NFL’s prohibition of the drug.

The former NFL QB believes mushrooms will save the world.

“The world would be covered in sh– if it weren’t for mushrooms,” Plummer says. “They’re cleaning up the mess we’ve created.”

Plummer co-founded MyCOLove Farm in 2021. The farm is described as a “full-scale medicinal and culinary mushroom farm.”

Some mushrooms, Plummer says, are the perfect antidote to physical and mental issues society is dealing with each day, better than prescription meds, he vows. Fungi friends like Reishi, Turkey Tail, Lion’s Mane and Cordyceps, Plummer says, can help alleviate various maladies such as flare-ups of anxiety, seasonal allergies and digestion issues. Since retiring, Plummer has long been a voice for plant-based alternative medicines. Six years ago he became a high-profile advocate for CBD-related treatment that helped alleviate the pain and depression he battled after he retired.

Plummer thanks mushrooms for helping heal physical and emotional ailments due to his football career. He also says that they’ve aided his sleep since retirement and that they could hold the key to immortality.

“I’m going to live a long time. I know it. They’ve told me that. I’m ready for that. I’m not saying this to just sell a f—— product, I’m saying this because I believe it wholeheartedly. Like, why wouldn’t you want to live?”

If you come at the king, Antonio Brown, you best not miss…https://t.co/u3I6XILILy