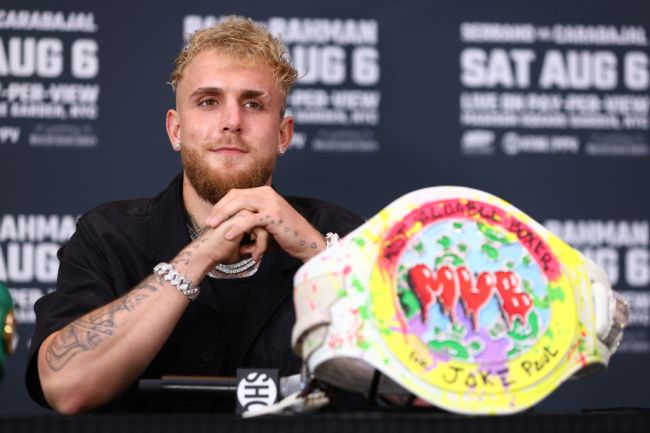 In the world of sports, nobody is quite like Jake Paul.

The YouTuber-turned-celebrity boxer has taken the boxing scene by storm. He’s defeated the likes of Nate Robison, Ben Askren, and even Tyron Woodley twice on his way to an undefeated 5-0 boxing record.

However, most people are familiar with Paul from all the antics he does outside of the ring. Quite simply, the guy knows how to make headlines. Most recently, he revealed his willingness to fight his own brother for a payday.

Ahead of his next fight against Hasim Rahman Jr., it appears that carrying the heavy burden of fight promotion has finally caught up to the YouTube sensation.

In a ridiculous video posted to Twitter, Paul appears bedridden in hospital scrubs while joking that he broke his back “carrying the promotion for this event.”

Had a little accident but will still be able to fight August 6th. Get your tickets 👉🏼 https://t.co/j4OvSRYRxA pic.twitter.com/6YBbpHTk8K

It’s not just this next fight that’s got the man suffering though.

In classic Jake Paul fashion, he let everyone know that he’s been doing all the heavy lifting on promoting his five previous fights. “These motherf**kers never sell s**t,” Paul screams in the video, “They couldn’t sell a pen to a writer.”

It’s videos like this that keep Paul the talk of the town, but he makes a good point. Tommy Fury, heavyweight champ Tyson Fury’s younger brother, was originally scheduled for the August 6th bout at Madison Square Garden.

With Fury unable to make the event due to travel restrictions, Paul is now set to face a lesser-known opponent in Hasim Rahman Jr. You could say the change was the straw that broke The Problem Child’s back.

Hasim Rahman Jr. is going to learn a lesson from the content creator. Get your tickets now. https://t.co/8jmN27i2HC pic.twitter.com/NasS19DKVv

Luckily, Paul will make a full recovery from his “accident” in time for the fight. Until then, fans will be waiting eagerly to see if any real hospital visits are needed.