WATCH: Jake Paul Pulls Up To Open Workouts Riding A Horse Ahead Of Anderson Silva Fight 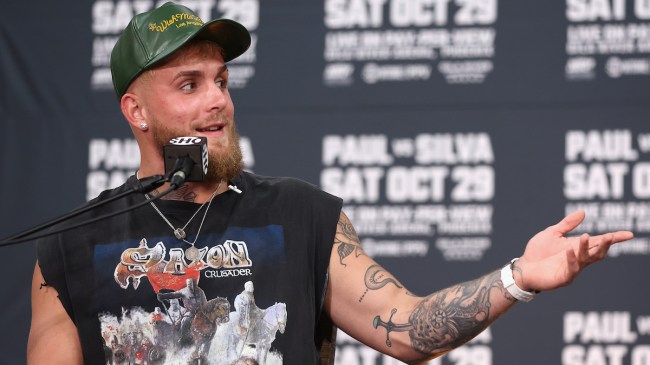 “The Problem Child” hasn’t fought since his second victory over Tyron Woodley in December 2021. After failed attempts to fight Tommy Fury and Hasim Rahman Jr., Paul is set to face his most dangerous opponent yet in UFC legend Anderson Silva.

With just a few days left until they step into the ring, the fight week festivities kicked off in Arizona for an open workout. It should come as no surprise that Paul made quite the entrance arriving via horseback.

.@jakepaul always knows how to make an entrance 😳 🐎

It’s not even fight night yet and Paul is going all out on the theatrics. Of course, we expect nothing less from the YouTuber-turned-boxer.

He later revealed the reasoning behind his grand entrance too. With such a formidable opponent ahead, it seems Paul had called in the cavalry—literally.

“I’m going to war. I feel like a warrior, like a gladiator. That’s really what this is on Saturday and I am going to war. This is one of the toughest fighters in the world, a combat sports legend. It’s not going to be an easy fight, so I’ve got to come in on the horse like I’m prepared for battle.”

There’s plenty of truth to Paul’s comments. Silva is widely considered one of the best strikers ever in MMA and that’s a tough matchup for anyone. Nevertheless, the excitement is building and it’s shaping up to be quite the battle.

After how Jake Paul pulled up to the open workout, we’re certainly excited to see what’s in store for his walkout on Saturday.