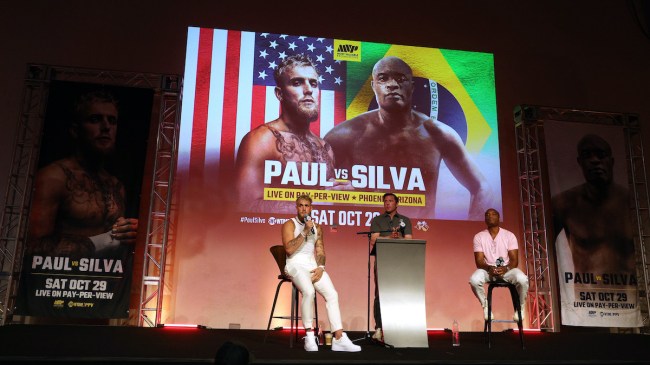 Jake Paul is not one to shy away from a challenge. It appears he’s as confident as ever heading into his next bout against UFC legend Anderson Silva, even challenging Dana White to another massive bet.

The UFC president has been an outspoken critic of Paul’s boxing career. The two personalities have clashed over a range of topics, including Paul’s opponents, fighter pay, UFC health benefits, and more. With Paul vs. Silva now announced, White credited the matchup as a “real fight” for once.

However, Paul wants White to put his money where his mouth is. During Monday’s press conference, “The Problem Child” called out White for failing to pay up on a previous bet before issuing a new $5 million dollar bet on the upcoming fight.

“I want you to come out of hiding. Stop being a b*tch and make a bet against me and Anderson. And actually, pay up this time. Because you didn’t think I’d take this fight. So let’s make a bet. Let’s put a mil, let’s put 2 mil, let’s put 5 mil on it. But I bet you won’t, Dana, because you’re a b*tch.”

Paul first calls out White for owing him money after defeating former UFC fighter Ben Askren in 2021. The UFC president previously stated that he’d put $1 million on Askren to defeat Paul but clarified that he never actually placed the bet.

Chances are Paul won’t see that money or a response to his latest challenge either. In the build-up to UFC 279, a fed-up Dana White demanded reporters stop asking about Paul because “he’s not even in the same f**king sport.”

With Paul not expecting a response, he tried placing a side bet with Anderson Silva. “The Problem Child” offered to get a spider tattoo, in reference to Silva’s nickname, if he loses the bout.

Silva wasn’t feeling it and quickly cut him off. In what had been a relatively tame press conference, Silva fired off a hilarious jab at his opponent.

Silva went on to reveal his hatred of tattoos as the reason he wasn’t interested in the bet.

Most people didn’t expect Jake Paul to make it this far, let alone take Anderson Silva on as his opponent. But here we are with the fight actually happening.

While it’s likely his toughest matchup yet, it’s clear that Paul doesn’t have a shred of doubt about what the outcome will be. Whether there’s a $5 million bet on the fight or not, he’ll look to keep his undefeated professional boxing streak alive on October 29th.