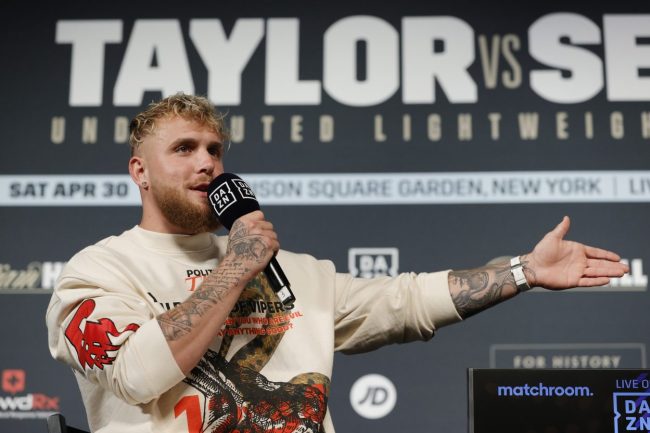 Jake Paul is a master of promotion.

The YouTube superstar has transcended online fame and turned himself into a household name due to boxing matches against largely washed up celebrities. He beat up former NBA Dunk Contest champ Nate Robinson. He made former UFC fighter Ben Askren look like a chump. And he starched former UFC welterweight champion Tyron Woodley two times.

Paul’s next opponent was supposed to be even bigger. He was set to take on professional boxer Tommy Fury, the older brother of heavyweight champ Tyson Fury, on Aug. 6 in Madison Square Garden. But now that has been called off due to Fury’s travel restrictions.

Paul will still fight at MSG on Aug. 6. But he’ll have a much different opponent in the former of Hasim Rahman Jr.

August 6 I’m showing the world that Jake Paul is a bad mother fucker.

A quick glance shows that as of Thursday morning, Rahman Jr. didn’t even have a Wikipedia page. Rahman Jr. is the son of former heavyweight champion Hasim Rahman, who knocked out Lennox Lewis in 2001. He’s 12-1 as a pro but has little in the way of impressive wins and was most recently TKO’d by definitely-not-a-serial-killer James McKenzie Morrison on April 29.

Suffice to say, fans were pretty underwhelmed by the replacement opponent.

Wack Paul fight somebody of significance nobody is buying this shit! Who the hell is that!!! @AdrianPeterson @frankgore would draw more paper views!! You should just hire me to be part of your PR team!!! 🤯🤯🤯 https://t.co/rG80u6XOlS pic.twitter.com/eoy6Y4oV2m

WHO in the world is that? https://t.co/eiYuyw4K0L

Rahman Jr. has a more distinguished boxing background than any of Paul’s previous opponents. But he’s also a former sparring partner of Paul, which has some feeling suspicious.

Fighting his own Sparring partner who is on his payroll. What a joke 😂😂😂 https://t.co/6KT2iTgSBp

As always, Jake Paul knows how to get people talking.