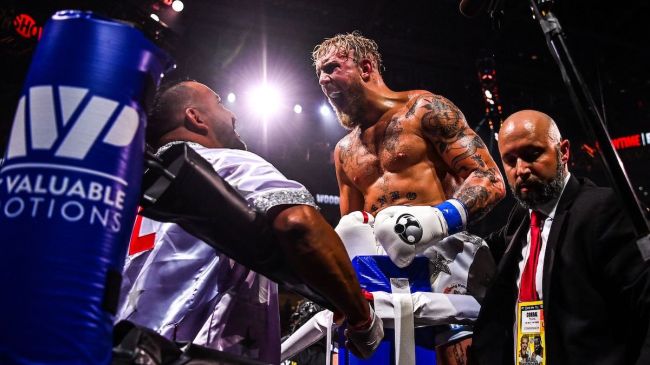 Jake Paul has already stepped into the ring with two former UFC fighters and it appears he’ll do it once more against arguably his most dangerous opponent yet.

The YouTuber-turned-boxer hasn’t fought since December of 2021, but it hasn’t exactly been his fault. Paul’s original bout against Tommy Fury was canceled due to travel issues. Then weight disputes with replacement Hasim Rahman Jr. provided yet another obstacle along the path.

While “The Problem Child” has seemingly agreed to fight British YouTuber and rapper KSI, the bout won’t happen until later in 2023. In the meantime, it appears Paul already has plans to return to the ring on October 29th and it’s not looking easy.

According to reports from NoSmokeBoxing and YouTube personality Keemstar, Paul’s next opponent will be none other than UFC legend Anderson Silva.

Who you got? I’m literally hearing that this is going to be announced! #DramaAlert pic.twitter.com/1aNjUbSLjw

Silva is a former UFC Middleweight Champion and widely considered one of the greatest mixed martial artists ever. Case in point, he still holds the record for the longest title reign in UFC history.

Silva ventured into professional boxing following his retirement from the UFC and has continued his dominance. He shocked the world in 2021 by defeating Julio Cesar Chavez Jr. and then destroying Tito Ortiz.

While Paul has taken on the likes of Tyron Woodley or Ben Askren and emerged victorious, fans will likely expect a different outcome this time. Silva is by far his most accomplished opponent and this will be anything but a cakewalk.

It’s not the first time Silva has considered stepping into the ring with a YouTuber-turned-boxer either. “The Spider” was previously linked to fighting Logan Paul, but it appears he’s settled for the younger Paul brother now.

Earlier in the month, Jake Paul and Most Valuable Promotions teased the potential return. In doing so, Paul revealed his opponent would have a winning record and also be a favorite in the matchup. Anderson Silva certainly checks both of those boxes.

My next opponent will be a pro boxer and of course he will have a winning record just like Timmy and Ramen did before they pulled out. October.

Next week we will announce JAKE PAUL’s next opponent. @jakepaul will almost certainly be the underdog. He knows that and he wants that.

With the rumored bout roughly two months away, fans can likely expect an official announcement sometime in the next week. But given how Paul’s last two scheduled bouts went, they shouldn’t get their hopes up about this matchup quite yet.