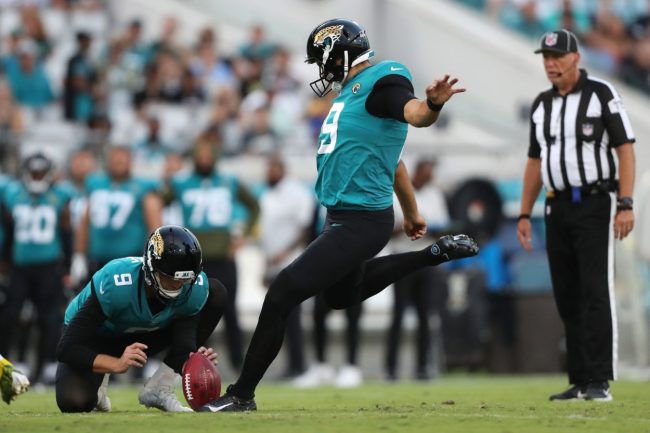 Urban Meyer’s brief stint as the head coach of the Jacksonville Jaguars was an unbridled, unqualified disaster. Meyer wasn’t good at the job, made headlines off the field for the wrong reasons, and wasn’t popular with the team or the organization at-large.

Perhaps Meyer’s biggest misstep came when he allegedly kicked former Jaguars kicker Josh Lambo while the NFL veteran was stretching. Lambo left the team early in the 2021 season before joining the Pittsburgh Steelers’ practice squad for the rest of the year. He’s currently a free agent

Now, we at Highly Clutch certainly don’t condone violence in any form. But the latest reports indicate that maybe Meyer knew something we didn’t about the Jags’ kicking game?

According to Pro Football Network reporter Aaron Wilson, Jacksonville cut the lone kicker left on its roster on Tuesday.

Ryan Santoso signed with the Jags back in March and was waived Tuesday when the team brought back quarterback Jake Luton, who started three games for Jacksonville in 2020.

Santoso beat out Elliott Fry in a camp battle. But he went just 2-for-4 in Saturday’s preseason game against Pittsburgh Steelers. Each of the misses came from beyond 50 yards (51 and 57 respectively). Santoso also hit from 25 and 53 yards. Though that wasn’t enough to win over head coach Doug Pederson.

The 26-year-old kicker is a Michigan grad who spent parts of the last four seasons with the Detroit Lions, Tennesee Titans, New York Giants, Carolina Panthers and Los Angeles Rams. Though he’s just 4-of-5 in game action in that time.

What Jacksonville does next is anyone’s guess. But the no-kicker strategy is certainly a bold choice three weeks out from the start of the regular season.