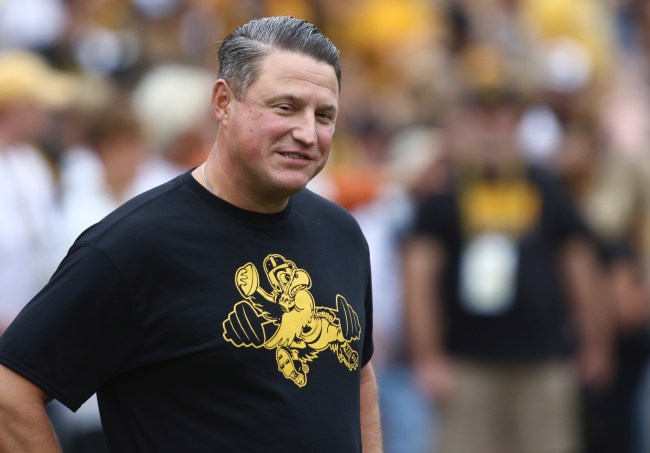 Iowa Hawkeyes football has never exactly been flashy. It’s a program built on great fundamentals and offensive line play. They need to run the football, play good defense, and hit the occasional big pass play off of play action. And, for years, it’s worked in Iowa City. Head Coach Kirk Ferentz has gone 193-134 at Iowa and they’ve been a consistent winner.

But, something is not right in Hawkeye and things are so bad one can only wonder what exactly is Kirk Ferentz’s goal and what is the program trying to accomplish.

Brian Ferentz is the current offensive coordinator at Iowa. For a quick background, the younger Ferentz was with the New England Patriots staff before coming back to Iowa in 2012. He was named offensive coordinator in 2017 following the retirement of Greg Davis, and the offense has been putrid since.

Last year, things were especially bad as the offense ranked 121st in total yardage at just over 300 a game. Most thought Kirk should’ve let Brian go last year, but instead he gave his son control of the quarterback room.

It has not been great. Coming into their week six game against Illinois, Iowa ranked dead last, 131st, in total offense wit 242 yards a game. They did not score a single touchdown against FCS South Dakota State in week one, winning 7-3 on two safeties and a field goal. Their only touchdown in their week two loss to Iowa State was after a turnover and the drive started inside the red zone. They lost that game, 10-7. They finally got their first scoring drive of over 50 yards on a one-play 55 yard run in their 27-0 win over Nevada, and that’s the only one they’ve had all year. The offense was horrific against Michigan until late in the game in a 27-14 loss last week.

But, Week six is where it all came to a head. Facing an Illinois team who lost starting quarterback Tommy Devito early on to injury, which made the Illini play Art Sitkowski, who may be the worst quarterback I’ve ever seen get multiple chances in power 5 football, they failed to score a touchdown and lost 9-6.

Iowa mustered just 221 yards on offense and had 51 rushing yards on 30 attempts. Yes, you read that right.

Yet, despite this downright terrible offense, and trust me, the stats don’t truly tell you how bad it is, nothing is changing. Brian Ferentz’s job seems safer than the late Queen’s corgis. And, quarterback Spencer Petras is downright awful. Through six games he is 69-125 for 770 yards with two touchdowns and two interceptions. His QBR is 38.4, a number that is truly unfathomable. It’s akin to getting a 5% on a multiple choice test.

But, his job seems to be perfectly safe.

Add to this is the strange arrangement where Iowa Athletic Director Gary Barta is the direct superior of Brian Ferentz due to nepotism laws, and the whole thing is wild.

I’m mostly joking about an investigation. But, seriously, Kirk Ferentz makes $7 million a year and appears wholly uninterested in improving this offense. Is he trying to set up Brian to be the next head coach like Joe Paterno tried with his failure son Jay? Why won’t he see what another quarterback brings to the table? These questions deserve answers.

As for Hawkeye fans, you booed injured players in a game last year. I hope Brian Ferentz is offensive coordinator for life.

Name someone who’s worse at his job than Brian Ferentz. I personally cannot, and that includes my Uncle Gary’s brief stint in Kmart’s sporting goods department in the late ‘80’s

Brian Ferentz w the little chuckle on the sideline.

Get this man out of the Hawkeye Football program, get him as far away as possible.

Brian Ferentz being caught smiling after Spencer Petras throws the game-sealing interception is going over as well as everyone can expect.