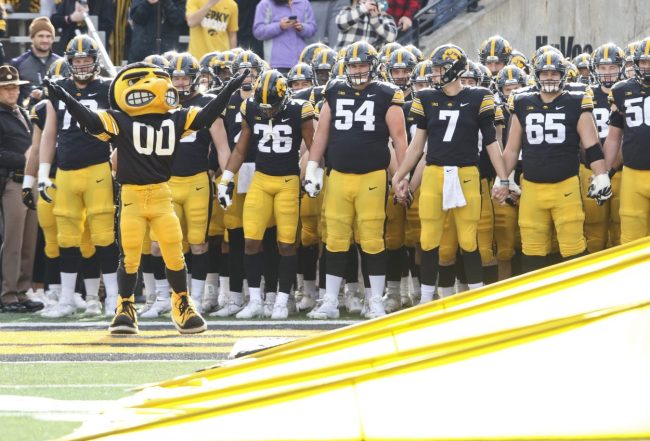 Few schools know how to produce stud NFL offensive linemen quite like the Iowa Hawkeyes. You can’t think of the NFL’s best linemen without a list littered with Hawkeyes. Iowa boasts some of the league’s elite guards such as Jacksonville’s Brand Scherff. Then there’s elite young Tampa Bay tackle Tristan Wirfs, and 2022 first-round pick Tyler Linderbaum at center for the Baltimore Ravens.

For the most part, Iowa and head coach Kirk Ferentz have turned unheralded recruits into absolute studs. Scherff and Linderbaum were just three-star recruits according to 247Sports’ composite rankings, while Wirfs was a four-star but fell outside the top 247 rankings.

Now, the Hawkeyes are getting the opportunity to work with an absolute stud, and scouts are drooling over what he could become.

– Tristan Wirfs clone?
– Didn’t want to do yet another photo shoot on his Iowa official visit (please inject that into my veins)
– Likes to push F-150s full of his teammates on leg dayhttps://t.co/bDWoB4eL1D pic.twitter.com/hr2WRYbzul

Proctor also checked in at No. 11 on 247Sports’ Andrew Ivins’ list of the freakiest athletes in the 2023 class. As you can see, he strength trains by pushing trucks full of his teammates. But that’s not all. The big man can also dunk a basketball and toss a shot put 52-feet-10-inches.

Allen Trieu of 247 had the following scouting report on the monster lineman:

Prototypical height, length and size. Lines up at left tackle and currently projects as a future college blind side protector. Good natural athlete. Shows explosiveness off the ball, twitch and quickness for a big man. Gets out of his stance quickly in pass protection. Has strength and a powerful punch. Can run and get out in front of plays to make blocks in space. Shows few glaring weaknesses, but can still tweak technique and steaily improve on testing numbers. Is a high-end prospect who can play for any school in the country and has the upside and work ethic to play beyond that.

We give it an "A" for effort. But the execution is severely lacking. https://t.co/TX78M4JV9q

Trieu projects Proctor as a future first round pick in the NFL Draft, and the more you read about him, the harder it gets to argue.