The Iowa Hawkeyes Finally Have Found A Quarterback In Cade McNamara 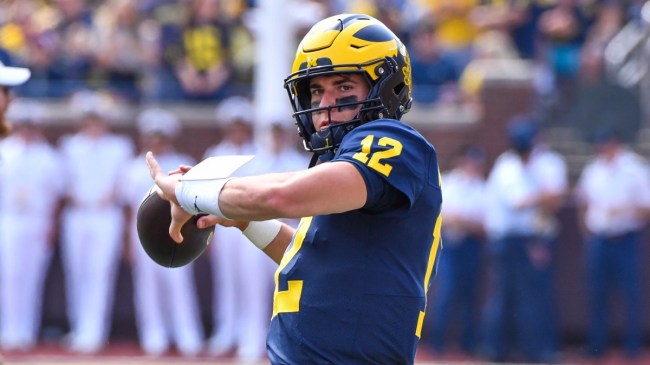 The Iowa Hawkeye offense in 2022 was an abomination to the sport of football. This was a team that went weeks into the season without a sustained touchdown drive of 60 yards or more. It ranked 130th out of 131 teams and frequently embarrassed the entire university. Brian Ferentz, the son of head coach Kirk Ferentz, serves as offensive coordinator. It’s a huge show of nepotism, as he is terrible at his job.

Of course, the offense had a bad quarterback, too. Spencer Petras was brutal, throwing for just five touchdowns to go with five interceptions in 281 attempts. His QBR was a putrid 31.4 out of 100. Watching him play was even worse than the stats. As bad as Petras was, backup Alex Padilla was somehow worse.

So, Iowa needed to make a move at quarterback, and now they have.

A year ago, Cade McNamara was preparing to start the Big Ten title game after becoming the first Michigan quarterback to beat Ohio State in a decade. But, he was beaten out by JJ McCarthy this year and has been the Wolverines’ backup. He has graduate transfer eligibility, and he’s going to exercise it.

That’s quite the get for Iowa, and it will be a huge upgrade on an offense that needs a total overhaul. He completed 64% of his passes for 2576 yards, 15 touchdowns and 6 interceptions in 2021 for the Wolverines.

I’m sure Iowa is not done in the portal, as they need to add explosiveness to all facets of their offense. They need help on the offensive line, too. But, 5-star incoming tackle Kadyn Proctor should help on that front.