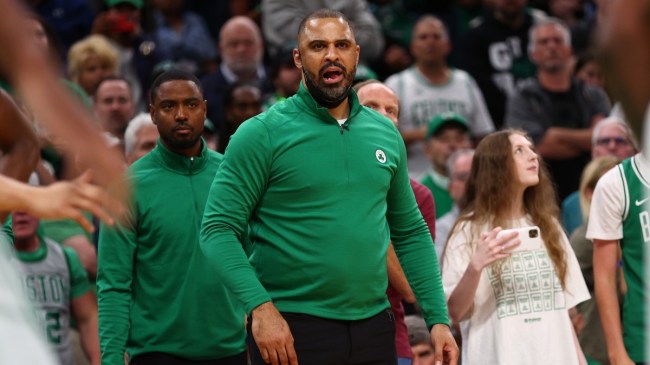 Boston Celtics’ head caoch Ime Udoka nearly had a dream first season as the head coach of the storied franchise. He led the young Celtics all the way to the NBA finals, where Boston outplayed the Golden State Warriors early in the series before losing three straight games to fall 4-2.

But, earlier this week, news broke that Udoka was being suspended indefinitely by the Boston Celtics for inappropriate conduct with a team employee. Now, in the midst of an NFL Thursday Night Football game, the franchise has handed down their punishment to their head coach.

Ime Udoka is being suspended for the entire 2023-24 season

The Boston Celtics released a statement saying that Udoka was suspended for the entire season and that his position with the franchise would be re-evaluated at a later date.

This comes as a crushing blow to the Celtics, as Udoka looked to be a natural as a head coach in the NBA.

Udoka has put out his own statement

Just one minute after the Celtics released their statement, Udoka released one of his own.

That is not a lot of detail provided by Udoka’s statement. The prevailing theory is that Udoka had an affair with a female Celtics’ staffer that was sexual in nature. Udoka has dated actress Nia Long for over ten years, and the engaged couple have a child together.

It seems like quite the punishment if it’s just a consensual relationship between two team employees. But, there has to be more to the story that warranted such a harsh suspension.

The NBA world is ablaze with takes regarding the suspension.

If all there is to the story is an illicit relationship between him and a staffer, I agree with this take.

If I’m Ime Udoka there’s 0 chance I’m returning to the Celtics organization. They’re treating him like a convicted felon

But, again, there has to be more to the story, right?

I will say that as someone with a law background, I can assure you this is not unconstitutional.

I think this is getting closer to the truth. It’s not far-fetched to think that someone has a grudge against Udoka and that’s how this got out.

This entire Ime Udoka PR rollout is ridiculous. Somebody leaked this to the media in order to embarrass him, expose this to his wife & also smear him publicly.

I get that infidelity is a serious issue but this is 100% personal for whoever in the organization this affected.

I do think the Celtics should just move on from him at this point. It’s not worth the long-term controversy.

Just fire him now, and move on. Nobody wants to be talking about this a year from now. He had a contract and didn’t honor it because he has no self control. That’s not a good role model for a coach.

I’m sure more details will be leaked soon.