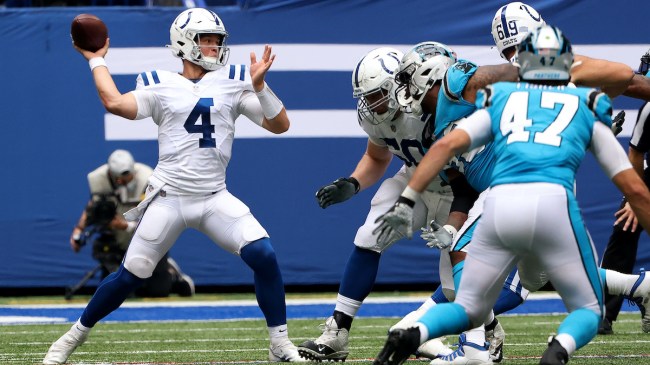 The Indianapolis Colts have struggled to find consistency at the QB position since Andrew Luck’s retirement in 2019. Now three years later, the team is moving onto their 6th different starter with a rather surprising decision.

The Colts acquired Matt Ryan this past off-season after trading away Carson Wentz, but it hasn’t gone as hoped. The team sits 3-3-1 with an offense that’s underperformed so far. After Sunday’s 19-10 loss to the Tennessee Titans, it appears the Colts are ready to make yet another QB change.

On Monday, Colts HC Frank Reich shockingly announced that Ryan, who suffered a Grade 2 shoulder separation, would be benched going forward. Instead, former Texas QB Sam Ehlinger will start against the Washington Commanders in Week 8.

After winning the backup role over Nick Foles two weeks ago, Ehlinger is in line for promotion once again. It’s a surprising decision given the 2021 sixth-round draft pick has yet to throw a pass in the regular season.

Nevertheless, the Colts seem to have complete faith in their young quarterback moving forward. Reich even emphasized that Ehlinger will serve as the team’s starter for the rest of the season, regardless of Ryan’s injury status.

To clarify: the Colts are making the switch at QB regardless of Matt Ryan's injury. The plan, as of now, is for Sam Ehlinger to be the starting quarterback the rest of the season.

It appears Ryan’s time as the starting QB in Indianapolis is up just seven weeks into the season, but it’s nothing new for the Colts.

Sam Ehlinger will be the Colts’ seventh different starting QB under HC Frank Reich since 2018:

The Colts are optimistic that Ehlinger can provide a much-needed spark to turn their season around. He brings extra mobility unlike Ryan and that could provide relief to the team’s struggling offensive line.

However, the track record of the Colts’ starting QBs over recent years doesn’t provide much hope. Ehlinger will look to prove himself on Sunday against the Commanders and perhaps even end the Colts’ QB struggles once and for all.