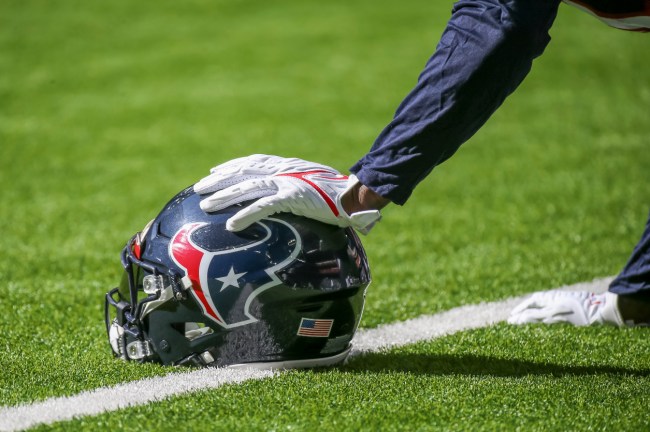 The Houston Texans aren’t expected to win very many football games in the 2022 season. Deshaun Watson is in Cleveland now, and the Texans hired Lovie Smith as the new head coach after one year of David Culley.

Davis Mills might be the future QB for the franchise, but there are a lot of question marks elsewhere. Nonetheless, the Texans haven’t stopped attempting to get the fans excited.

On Tuesday, they dropped their alternate helmets for the 2022 season, and they are glorious.

Look at the new Texans helmet that the team will wear on Thursday Night November 3rd against the Eagles. #WeAreTexans #NFL pic.twitter.com/gN1PjBC9QP

The Texans’ new ‘Battle Red’ helmets will be worn on Thursday Night Football against the Philadelphia Eagles in November. Here’s another look at the new crowns.

The #Texans have unveiled a new Battle Red Helmet that will be worn during the 2022 season. pic.twitter.com/YgRLwaTUL9

The Texans will also wear these during a training camp practice. This will be the first time they wear anything other than the blue ones.

Texans announced they’ll wear their new “Battle Red Helmet” on Battle Red Day Nov. 3 at NRG Stadium. It’ll also be worn for 1 training camp practice, July 30, & go on-sale for fans. This’ll be the 1st time the Texans will wear a different helmet other than their classic blue one. pic.twitter.com/kNFC0iq7Zf

NFL fans sure are excited about these new helmets, and the New Orleans Saints unveiled their new lids earlier this offseason.

These are so clean@MiamiDolphins PLEASE GIVE US ALTERNATE HELMETS https://t.co/OEzcyDjBWd

This might be my new favorite NFL helmet https://t.co/h3owrb9fKV

These helmets are legit! https://t.co/60nU4DkKV8

Fans of other NFL teams are now begging for helmet changes to their respective teams.

@Browns you're up next https://t.co/UlmvjdfKIe

@Jaguars literally no excuse now. What exactly are y'all doing? https://t.co/hPWwK9f9NI

And yet the @Seahawks haven't brought back their ELITE retro silver helmets. Why is that 🤔🤔🤔 https://t.co/gATkkwGagu

Hey @AZCardinals take note maybe change something up for once https://t.co/BWt8vbD7Cq

It is only July, so other NFL teams may be designing new helmets for the 2022 campaign. Still, the Texans might have the best helmet in the NFL for the time being. Honestly, they might want to wear these more than just once during the season.