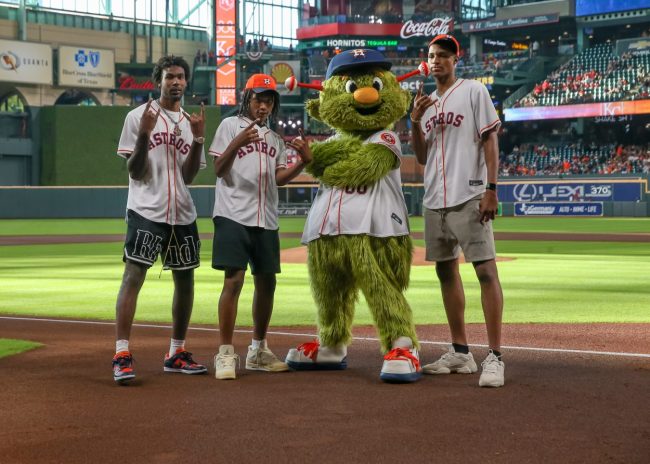 Jabari Smith has had a whirlwind couple of weeks.

Once presumed the top pick in the NBA Draft, Smith dropped to No. 3 where he was selected by Houston Rockets after the Orlando Magic took Paolo Banchero No.1.

He joins 2021 Rockets rookies Jalen Green and Alperen Sengun in what could turn out to be one of the league’s most formidable trios moving forward.

But Smith may have made a slight misstep with Houston fans on Wednesday.

A day before facing off with Banchero in the pair’s NBA Summer League debut, Smith joined fellow Rockets picks Tari Eason and TyTy Washington to throw out the first pitch at a Houston Astros game.

Prior to the game, Smith had this to say to Astros mascot Orbit.

An Auburn product, Smith was of course referring to the university’s famous Twitter mascot. And let’s be real, Orbit is a second-tier big green MLB mascot behind the Phillie Phanatic and Wally the Green Monster.

Both Auburn fans and Astros fans had a say on Smith’s brutal honesty.

How do you not just love this man?!

Smith spent less than one full year as a student at Auburn, but it’s clear he has quite the affinity for the school and its mascot. As for Rockets fans, if their new young star plays the way that he did in college, something tells us they’ll be willing for forgive his mascot opinions.

Whether or not Orbit ever recovers is another story. It’s bad enough when you’re not even the best big green guy in the league, but now you’ve got college mascots coming for your spot as well.