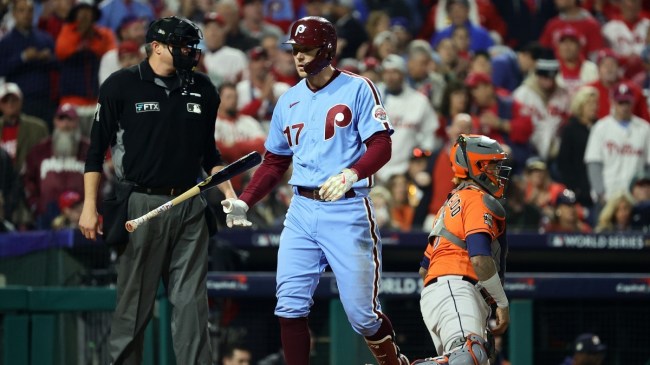 Philadelphia fans are some of the fickle in all of sports. When things are going well, they are the best fans to have behind you and will support you to the end of the earth. But, when you mess up like Rhys Hoskins did in game 5 of the World Series on Thursday, they can be quite miserable.

He had a nightmare game, going 0-5 with 4 strikeouts while stranding 3, and had a costly mistake in the field as the Phillies lost 3-2 to fall behind in the series 3-2 against the Houston Astros.

Rhys Hoskins 0-5 with 4 strikeouts and 3 runners left on base in Game 5 of the World Series.

Plus the game-losing error.

Phillies fans are ticked at Hoskins

Naturally, Philadelphia fans are not pleased with their first baseman.

If rhys hoskins is still on this team next year I’m not watching.

Hoskins should never see the field again. Go to hell

Hoskins finally hit something but it was a human head

Rhys Hoskins is the biggest loser of any player that plays in Philly https://t.co/IowBZJZtDi

Mind you, this is the same Rhys Hoskins that had one of the great moments in Phillies’ playoff history.

And ultimately, if he hits the cover off of the ball and helps Philadelphia win the next two games and the World Series, he will be forgiven. If not, he may hear some boos next year on opening day, which would be pretty unfair for a guy who helped them get this far.

The Astros will look to close out the series Saturday in Houston.