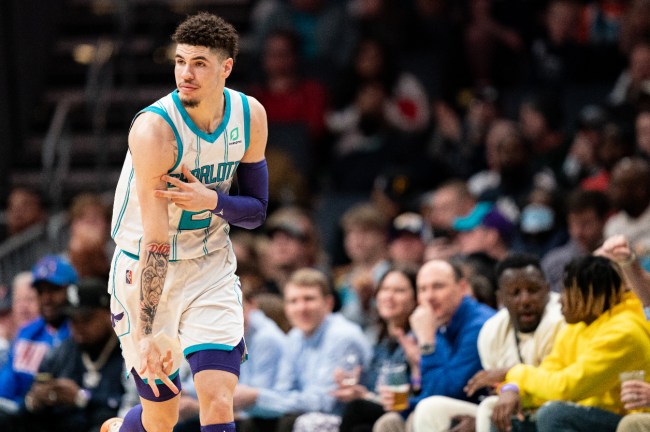 Now, it is LaMelo Ball going viral. The Charlotte Hornets point guard was playing with his AAU team, and he was caught on video putting the team into a blender with some flashy moves.

He made it look effortless, too.

LaMelo giving his AAU team the business at practice 😭 @MELOD1P

LaMelo did this all with a smile on his face, too. In another clip, he showed off the long-range game against the same AAU team.

At least Ball is getting some work in.

He’s had a busy offseason and had his own invitation at the beginning of July.

Can't wait to see all the talent on display at the LaMelo Ball Invitational this weekend. Here are a few teams to watch #PhenomHoops

17U Combine Academy AAU – Justiniano
17U Kernersville Bulls 17U
17U NC Bulldogz
17U South Charlotte Bolts
17U Dunn Wildcats pic.twitter.com/plxruVptVg

And he continues to cook up his AAU team while refining his craft for the 2022-2023 season. He put together a stellar campaign in his second NBA season, finishing with 20.1 points, 6.7 rebounds, and 7.6 assists in 75 games.

The Hornets are going to adjust once again with former coach Steve Clifford back in the fold in Charlotte, but perhaps that bodes well for LaMelo Ball.

Nonetheless, the younger Ball brother is spending his offseason working on his game, and his AAU team might not be too happy that this video went viral.