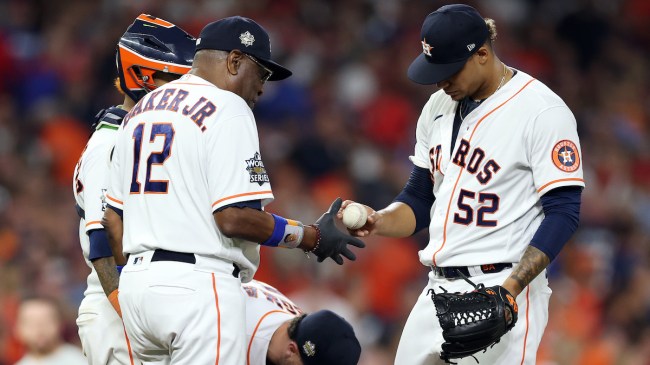 The Houston Astros’ undefeated playoff run came to an end on Friday night in Game 1 of the 2022 World Series and it was an all too familiar scene for manager Dusty Baker.

The Astros came out swinging and took an early 5-0 lead with a pair of home runs from right fielder Kyle Tucker in the second and third innings. It went downhill from there with the Philadelphia Phillies rallying back against Astros ace Justin Verlander to tie the game at 5-5 in the fifth inning.

The Phillies would complete their incredible comeback with a solo shot from catcher J.T. Realmuto in the tenth inning. It was the largest blown lead in the World Series since 2002 with history repeating for Dusty Baker.

This was the largest #WorldSeries comeback since 2002, where the Angels trailed the Giants 5-0, and came back to win 6-5.

Dusty Baker was the manager of the losing team in that game as well. pic.twitter.com/CJztKS8nLx

Baker was the manager of the San Francisco Giants back in 2002. The team had also made it to the World Series and faced the Anaheim Angels. In Game 6, the Giants took a 5-0 lead in the top of the seventh only to be trailing 6-5 by the bottom of the eighth.

Twenty years later, Baker blew another 5-0 lead with the Astros.

With the Phillies also delivering an unexpectedly impressive playoff run, it seems there are quite a few similarities to that 2002 World Series.

Phillies channeling the 2002 Angels, which were the Comeback Kids…. It is the 20th anniversary of that WS too

It was a brutal night overall for Baker. MLB fans were already upset with the Houston manager over his Bill Cosby comments ahead of the game. Then after the game, Astros fans voiced their frustrations with his decision not to pull Verlander earlier.

Game 1 also saw an unfortunate repeat for the Astros ace as he remained winless in the World Series despite having 8 starts.

Justin Verlander will remain winless in his #WorldSeries career after giving up five runs in five inning.

The Astros now trail the Phillies 0-1 going into Game 2 of the World Series on Saturday.

Given Baker and the Giants went on to lose the 2002 World Series, the Astros will certainly hope that history stops repeating itself moving forward.