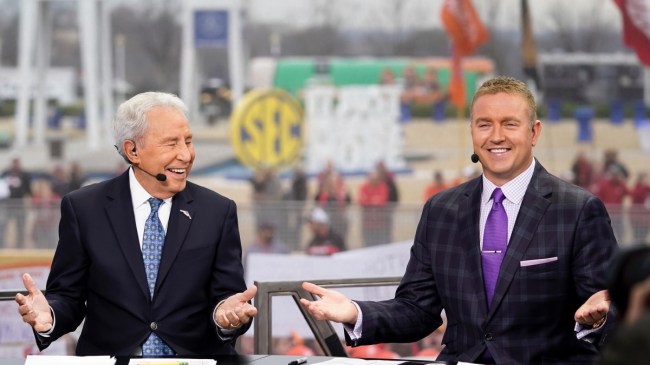 Lee Corso is synonymous with college football. The former Indiana coach has been with ESPN for 35 years, the entirety of the hit pregame show College Gameday.

Unfortunately, the legend’s health is slipping. He’s missed the last two weeks of College Gameday and he’s shown clear cognitive decline the past few years. And, on Monday, rumors fearing the worst about the 87-year-old started finding their way on Twitter, only for cohost Kirk Herbstreit to have to debunk them.

Rumors that Lee Corso had died found their way to Twitter

With gameday headed to Alabama and Tennessee this weekend, people are excited for the matchup of the two classic rivals that both find themselves in the top ten. But, strangely, posts on Twitter about Gameday heading to Knoxville went missing on Twitter.

And that assumption was the Lee Corso had passed away.

Hope this news is fake about lee corso! Come on! Issue a statement @KirkHerbstreit

Of course, it was mostly Tennessee fans making this assumption. There’s a joke in there somewhere about the intelligence of Tennessee Volunteer fans. I won’t make the joke, but you can.

I hope that all of this speculation is just rumor. Lee Corso is a national treasure. I know his health has been in question lately but hopefully he’s okay.

People were thrilled to hear the good news.

Losing Corso for me would be like A Brit having just gone through the death of the queen. The first job I ever wanted as a kid was Lee Corso’s. I might not get that job, but I still like to pretend!