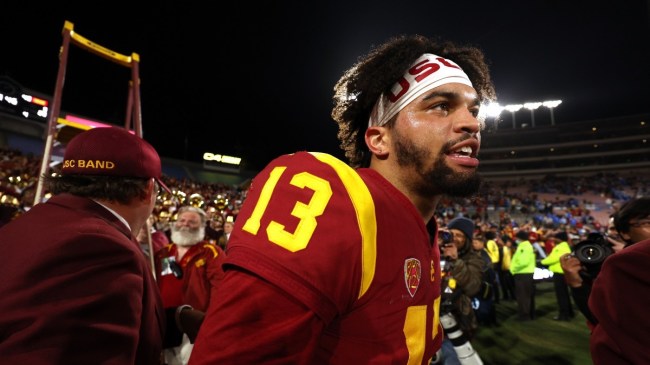 The Heisman Trophy is arguably the most prestigious and recognizable individual award in all of American sports. The award has been given out annually since 1935 by the New York Athletic Club to college football’s best player. Legends of college football like Roger Staubach, Earl Campbell, Reggie Bush and Tim Tebow have raised the trophy.

This year’s race was pretty open at the beginning of the year, and saw plenty of twists and turns. But, as always, the field has narrowed down. Preseason contenders like Bryce Young and Will Anderson dropped out to underwhelming team results, a fate that harms many candidates.

A few made it to November with chances intact. But, players like North Carolina quarterback Drake Maye, Michigan running back Blake Corum, and Tennessee signal caller Hendon Hooker all saw their hopes severely harmed in week 12 for various reasons.

And now, it seems to be a two-person race.

Here are the updated odds from DraftKings Sportsbook. 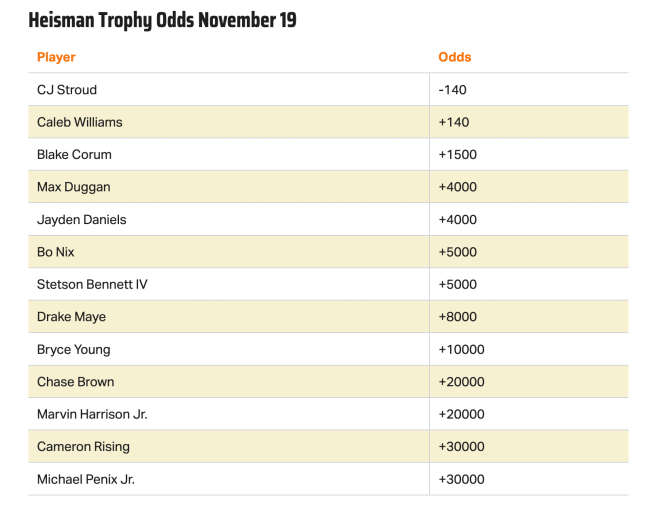 Ohio State’s CJ Stroud was the preseason favorite at most sportsbooks after finishing fourth a year ago. He has been steady this season, and has completed 66% of his passes for 35 yards and 4 touchdowns for the high-flying Buckeyes. But, a lot of his candidacy will depend on how he plays in next week’s game against undefeated Michigan for all the marbles.

USC’s Caleb Williams has come on strong. The Oklahoma transfer went to Los Angeles with Coach Lincoln Riley and he has been sensational. He’s completed 65% of his passes for 33 touchdowns and 3 interceptions despite having much less (albeit still good) talent around him than Stroud. The sophomore has played his best football down the stretch, too.

And, he was at his absolute best against crosstown rival USC, setting a series record with 502 total yards of offense. He also made some ridiculous throws.

If both quarterbacks win their final two games of the season, both of them being huge games for each team, it’s going to be quite the race to the finish.

The Heisman ceremony is December 10th at 8PM at Lincoln Center in New York.