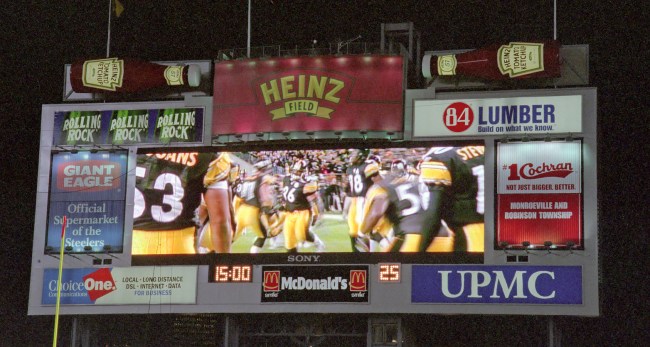 The Pittsburgh Steelers have been playing home games at Heinz Field for a long, long time — since 2001. But that won’t be the case anymore.

According to Andrew Fillipponi of 93.7 The Fan, the two sides could not reach a deal.

Breaking: Heinz Field is no more. The ketchup giant will not extend its naming rights deal for 2022. Sources say a new name for the stadium could be announced this week.

President Art Rooney was optimistic the two sides could strike a deal earlier this season. But, unfortunately, that isn’t the case.

With the naming rights to the stadium up, Steelers President Art Rooney II tells me he's optimistic about keeping the name as is. pic.twitter.com/84YnNqX0Mx

The ketchup bottles in the stadium might need to go away, and who knows what the new name will be.

Heinz paid $57 million during the time of the arrangement, according to Mike Florio of Pro Football Talk, and the new rights — for whoever takes it — will be a tremendous amount of cash.

This is tough news for Steelers fans, especially for the generation who haven’t seen anything else.

The Name Suggestions For Heinz Field Are Priceless

When the news came, people flocked to react to the disappearance of the iconic name. But, more than that, some hilarious name suggestions came out.

The petty thing to do would be to name it Hunt's Field. https://t.co/tEgvyHgU1O

All signs point to the University Of Pittsburgh Medical Center being the lead horse in this race. The Steelers’ practice facility is owned by that company, so them taking the stadium makes sense also.

But, for most, it will always be known as Heinz Field.

It’s gonna be like Staples Center. Will always be Heinz Field 😂 https://t.co/z5jP2ajQss

So, Heinz Field is no more. It will take some getting used to. But, on Monday morning, the new name was announced: Acrisure Stadium.