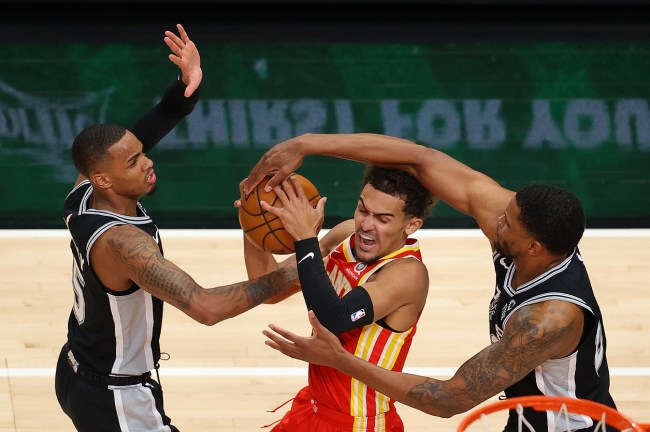 The NBA offseason has just begun, but it has already been full of constant rumors. Most of the talk has been regarding Brooklyn Nets star Kyrie Irving.

But, one team that is expected to make a significant splash is the Atlanta Hawks. They are trying anything possible to pair Trae Young with another star player, including dangling John Collins in a trade.

There is reportedly serious traction in a deal with the San Antonio Spurs.

The Hawks Are Close To Pairing Trae Young With Dejounte Murray

This would be a fantastic guard duo in Atlanta, and Zach Klein reported a deal is close — and it doesn’t involve Collins.

In talking with multiple sources around the NBA, many believe Hawks on verge of trading for San Antonio's All-Star guard Dejounte Murray – However, it's looking like John Collins is not part of deal. Would be Gallo & multiple 1st round picks. Spurs prepping for future & '23 draft

The thought of Young and Murray together is fantastic, and Murray is coming off his best season as a pro. The former Washington Huskies star averaged 21.1 points with 9.2 assists and 8.3 rebounds and a pair of steals per game while earning his first All-Star nod.

The Hawks are pressed to bring in help for Young, and this would allow them to send Collins away as part of another trade — if that ends up being something they do this summer.

Nonetheless, the Hawks are swinging for the fences this offseason, and the dominoes might be starting to fall soon.