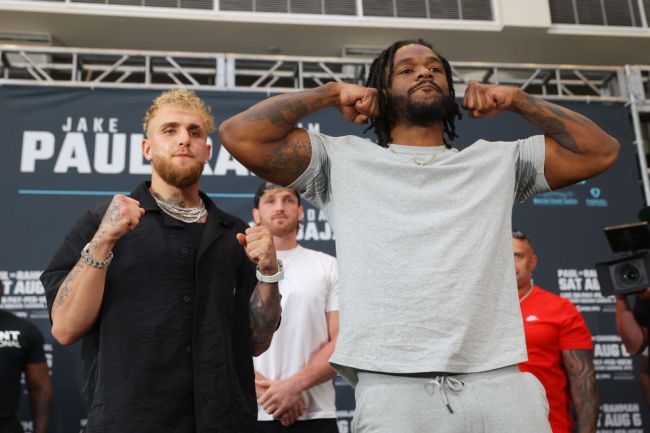 Following the cancellation of his MSG bout versus Jake Paul and the controversy surrounding his weight, Hasim Rahman Jr. is finally firing back—sort of.

Jake Paul vs. Hasim Rahman Jr. was originally scheduled for Saturday, August 6th. However, less than a week before the fight, it was called off. At the time, Paul took to Twitter citing his opponent’s refusal to make weight as the reason.

The initial agreement sanctioned the fight at 200 lbs and then 205 lbs before eventually being canceled. With video proof of Rahman Jr. weighing 216 lbs, most fans figured that’d be the end of it. But perhaps there’s more to it than we thought.

On Friday, Rahman Jr. staged his own unofficial weigh-in to counter the accusations of his camp wanting the fight sanctioned at 215 lbs. He was closer this time at 206.6 lbs, but still would’ve missed the original weight anyways.

Despite his fight with @jakepaul being canceled, @_HasimRahmanJr weighed in today 👀

The fight was originally signed at 200 pounds and Paul was willing to move it as high as 205 pounds. #PaulRahman pic.twitter.com/8cYwQ4Kia9

After recent speculation that the boxing event had actually been canceled due to lackluster ticket sales, this unofficial weigh-in fueled the fire.

For Rahman Jr., the 206.6 lb weigh-in had exposed Most Valuable Promotions and Paul. Or at the very least, showed that they hadn’t told the full truth. Jake Paul viewed it differently though.

But that wasn’t the end of it. Rahman Jr. continued to call Paul out on Twitter, even posting some unseen footage from their previous sparring sessions. And obviously, it didn’t show Paul in the best light.

Never in the history of boxing has someone pulled out a fight a week in advance over weight issues. I tried to tell y’all, “he’s a runner he’s a trackstar 🎶 “ pic.twitter.com/rK4HKV71Et

It appears Rahman Jr. is trying to flip the narrative and put the blame on Paul instead. Whether he was successful in that is definitely up for debate.

It's been a tough week for Kyler Murray. 😂https://t.co/zF4boGnGUY

Jake Paul vs. Hasim Rahman Jr. remains canceled for now. So fans will have to keep waiting for any announcements on Paul’s future boxing plans.