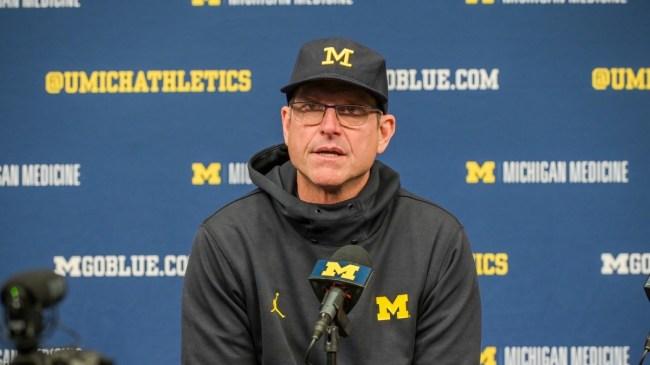 Jim Harbaugh is one of the best characters in all of college football. He’s one of the best coaches, too. The Michigan head coach just led his team to a 12-0 start for the first time since 1997. And, they’ve likely clinched a spot in the College Football Playoff for the second year in a row. The quirky Michigan alum has righted the ship after cries to have him fired intensified after the 2020 season.

But, he’s not necessarily a fan of reporters, especially during and after his games. Someone has gone the extra mile in terms of showing just how far he will go to avoid reporters.

A video of Jim Harbaugh dodging reporters has emerged

You have to check it out for yourselves.

Big Ten COY Jim Harbaugh made it all about the players all year long.

Credit to Harbaugh for making it about his kids, but he clearly just doesn’t want to talk to reporters.

No. He just hates interviews and makes his players talk to the media.

Jim just uses that to get away from doin interviews

What player will it be against Purdue?

Michigan will look to continue its undefeated run when they play Purdue for the Big Ten Championship on Saturday in Indianapolis. The Wolverines are heavy favorites.