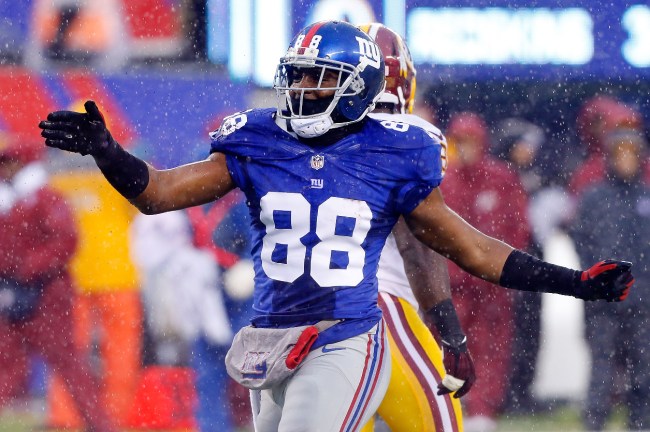 Sports memorabilia has an absurd price tag, especially as of late. We have seen all types of things auctioned off, and Super Bowl rings are one of the most targeted pieces of memorabilia.

According to TMZ Sports, former New York Giants wide receiver Hakeem Nicks saw his Super Bowl ring go for an eye-popping price: $117,000. Here are a few details of the ring, from Steven Taranto of CBS Sports:

The size 15 ring weighs a total of ninety-five grams and presents with moderate wear in its original wooden case, which has been slightly damaged. The face of the ring is coated in diamonds and blue sapphires featuring the Giants team logo and the four Lombardi Trophies the franchise has won.

The ring’s interior band features the text “All In” and “Finish,” which were team mottos instilled by Giants head coach Tom Coughlin.

Nicks’ Super Bowl ring was projected to go for around $80,000, so the fact it went for more is a nice addition for Nicks, who plans to donate the earnings to charity.

Hakeem Nicks is parting ways with his Super Bowl ring which is estimated to be worth $80K. 👀💍 pic.twitter.com/mgMcfjnGX8

Nicks played a big part in that Super Bowl XLVI victory over Tom Brady and the New England Patriots. Nicks registered 10 catches for 109 yards as the Giants stunned the heavyweight Patriots team.

His playoff run that postseason was sensational.

Hakeem Nicks had one of the best postseasons in NFL history in 2012. It all started on this monster play.

Nicks was an absolute stud on the Giants way to winning Super Bowl 46! pic.twitter.com/qAWkVP2Tur

That is a nice chunk of cash for Nicks.