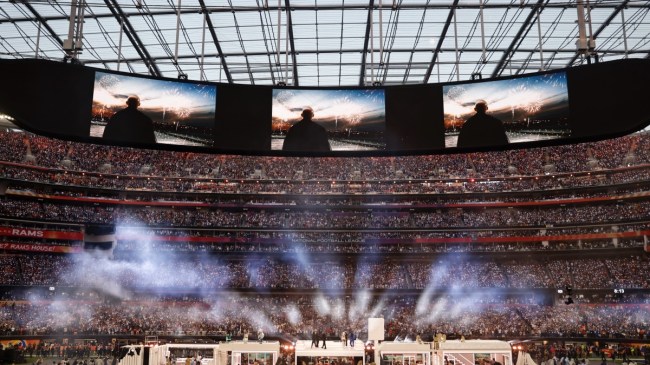 The Super Bowl halftime show is assuredly the biggest musical performance anywhere in the world every year. The fifteen-minute show is watched by around 200 million people around the world and gets some of the biggest names in music every year. Last year’s show was headlined by Dr. Dre, Snoop Dog, Eminem, and Kendrick Lamar. That’s a pretty good lineup.

But, the NFL may have something even bigger planned for Super Bowl LVII in Glendale, Arizona. The sponsor is changing, from Pepsi to Apple Music, too, and that may have everything to do with who is playing it.

According to TMZ, signs are pointing toward Taylor Swift playing this season’s halftime show. Swift, who was named by Billboard as the biggest pop star in the world, has a new album coming out next month.

Taylor Swift could be this season's Super Bowl halftime show act … at least, that's what the musician's fans are thinking after the NFL appeared to drop a big clue into it all on Thursday night. https://t.co/QSNwdZVZo0

The TMZ article reads in part:

Gear up Swifties — Taylor Swift could be this season’s Super Bowl halftime show act … at least, that’s what the musician’s fans are thinking after the NFL appeared to drop a big clue into it all on Thursday night.

Here’s the deal — back in May, Pepsi pulled out of its longstanding partnership with the league and its Big Game’s halftime show … and on Thursday night, the NFL announced it’s finally replaced the soft drink company with Apple Music as the new sponsor.

In its announcement, the league made no mention of a potential halftime performer for Super Bowl LVII … but, according to Swift fans, it didn’t need to — because the timing of the release said it all. The league curiously dropped the news at midnight — something that’s been associated with Swift for YEARS. She’s put out albums twice since 2020 that were released at that time, and she’s sung the word “midnight” hundreds of times in her tracks.

It went on to say that Swift, who hasn’t done a halftime show yet, may have held out because Pepsi was the sponsor. She has a longstanding endorsement deal with Coca-Cola.

Naturally, this is big news in the entertainment world. Swift is as universally known as any figure in the USA in sports or pop culture.

“Stan” twitter is a dangerous place, and Taylor Swift has as many stan accounts as anybody. Needless to say, they’re going crazy.

TAYLOR SWIFT HEADLINING SUPER-BOWL NEXT YEAR ISN’T A WANT ITS A NEED.

Her concert tickets are some of the most expensive on the planet. Everyone knows that Super Bowl Tickets are expensive as is. Add in a Taylor Swift performance to the equation and you could have record prices.

If / when Taylor ends up doing the Super Bowl one day, I will be either A) selling an organ to be in attendance or B) hosting the best Super Swift party possible.

As with anything, not everyone is thrilled by the idea. But, the ranch dressing critique is nonsense. Swift has a lot of different kinds of music. Her new album, titled “Midnights” promises to be another chapter in her musical evolution.

Taylor Swift is rumored to be this year’s Super Bowl Halftime Show, which means we went from soul food last year to ranch dressing.

Who knows, maybe she won’t even be the performer! But, signs are pointing that way and it would be a huge get for the NFL. Swift is preparing to go on tour in 2023.