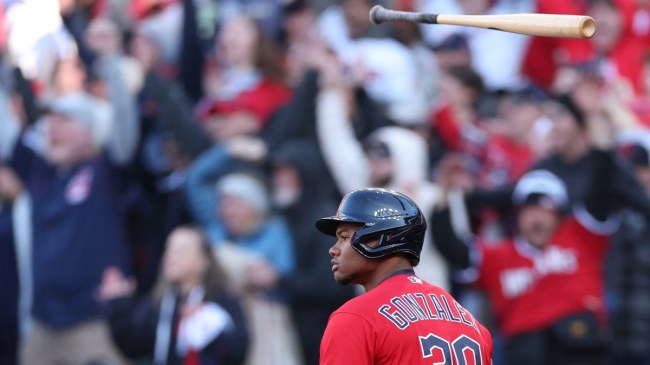 Baseball playoff games are always full of drama. It feels like the tension is rising on every pitch and it’s some of the best theatre in all of sports. And, Saturday’s game between the Cleveland Guardians and Tampa Bay Rays will go down as one of the great playoff games ever. The Guardians came in having won 2-1 in game one of the three-game series and needed only one win to advance. What happened was an absolute classic.

An Historic Pitchers’ Duel ended with a walk-off home run

After 14 1/2 innings of scoreless baseball, Oscar Gonzalez decided to end the game and the Rays’ season with one mighty swing.

Gonzalez famously comes to bat to the tune of the theme song from Spongebob Squarepants. So, someone had to set the home run to Spongebob’s greatest hit, Sweet Victory.

It is the longest a playoff game has ever gone with the score 0-0 and it is believed to be the first time a playoff series has ever ended 1-0 on a walk-off home run.

What a great moment for the franchise that many thought would be rebuilding for a while after trading away Francisco Lindor and Carlos Carrasco before the 2021 season. But, Jose Ramirez has continued to blossom into arguably the game’s best infielder. And, youngster Andres Giminez, who was acquired from the Mets in that trade, is another young superstar for the Guardians. Plus, Terry Francona is one of the best managers in the entire league.

What a thrilling result for a fan. As a Mets fan, I will assuredly never know such happiness. But, Cleveland fans will.

The Cleveland Indians always sucked on Columbus Day, change the name to the guardians and they’re hitting walk off bombs. 🤷🏻‍♂️