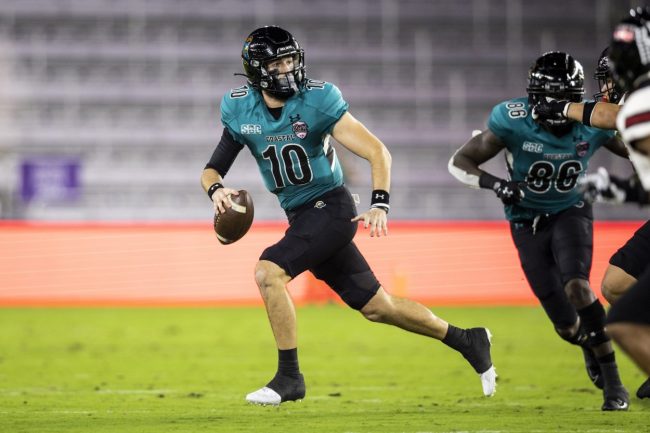 Coastal Carolina quarterback Grayson McCall burst onto the college football scene as a redshirt freshman in 2022. McCall dazzled in his first year as starter, throwing for 2,488 yards, 26 touchdowns and just three interceptions. He also ran for 569 yards and seven scores as the Chanticleers went 11-1 and made national headlines.

McCall was just as good as a sophomore. In his second act, the star QB threw for 2,873 yards, 27 touchdowns and, again, just three picks. This time he ran for just 290 yards and four touchdowns, but Coastal Carolina yet again made headlines by going 11-2.

When McCall opted to come back to the Chanticleers rather than enter the 2022 NFL Draft, even head coach Jamey Chadwell was surprised. In fact, Chadwell bought a special shirt to commemorate the moment.

Coastal Carolina HC Jamey Chadwell wore an “I Piss Teal” shirt, something he got after Grayson McCall’s return announcement.

McCall says he has more shirts in the works through NIL. pic.twitter.com/j3N138afvn

Now that McCall is back, he’s one of the biggest stars in the country entering the 2022 season and the school has already launched a website for his Heisman Trophy campaign.

Unsurprisingly, McCall is also drawing a lot of interest in the way of name, image and likeness deals. In fact, he may have just signed the most fitting NIL deal in the country.

McCall signed a deal to promote September’s NASCAR Cup Series race at Darlington Speedway. Darlington is one of NASCAR’s most historic tracks and is located just 65 miles from Coastal Carolina’s campus in Conway, South Carolina.

Grayson McCall will win the Heisman this year because of this. #TEALNATION https://t.co/xqNhGVJeju

I'm surprised we haven't seen more of these types of deals. Football and auto racing have had history particularly in the South. https://t.co/VDE4Zo9Wlm

That is some Myrtle Beach synergy: https://t.co/AQFM5JCikL

This is absolutely perfect https://t.co/zlyvCdLren

The Chanticleers begin the 2022 season Sept. 3 at Army, just one day before the NASCAR race at Darlington. Here’s hoping that McCall can get off to a fast start much like the cars he’s promoting will.