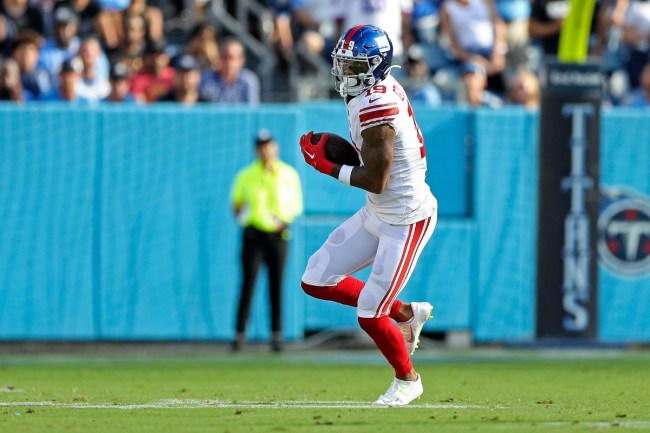 It’s no secret that the Dave Gettleman era was a disaster for the New York Giants. The former general manager from 2018-2021 had no winning seasons, with his best season being 6-10. He left a bad roster for the new regime of Joe Schoen and Brian Daboll, though they’ve somehow got the Giants sitting at 2-0.

But, what Gettleman was most famous for in his time in New York was terrible free agent signings. He started his tenure by signing Nate Solder to what was at the time the biggest contract ever for an offensive lineman. Of course, Solder stunk for the Giants. And now, what seemed to be the biggest disaster signing of his tenure seems to be on the way out.

In 2021 free agency, the Giants needed wide receiver help. So, Gettleman decided to pay big money to Kenny Golladay, who was coming off back-to-back 1000-yard seasons for the Lions. Golladay was given a 4-year $72 million contract with $40 million guaranteed. Let’s just say it didn’t work out, and now it appears Golladay is on his way out.

This is a startling development, given that there’s a ton of guaranteed money left on his deal. But, Golladay was terrible last year as he had 37 catches for just 521 yards and no touchdowns. He was constantly seen not hustling on some of his routes, too. That lack of hustle continued in camp and he was frequently dropping touchdown passes, as well.

Most fans want him gone

It’s an understatement to say most fans of the G-men are done with Golladay. I’m not sure if Odell Beckham would be willing to return to the Giants, but he would definitely be an upgrade over Golladay

This Giants fan is beyond done with Golladay.

Honestly who cares. Biggest bust we have had in history of franchise. Free agent wise

It will be interesting to see how this plays out, as New York still owes the wideout quite a bit of money.