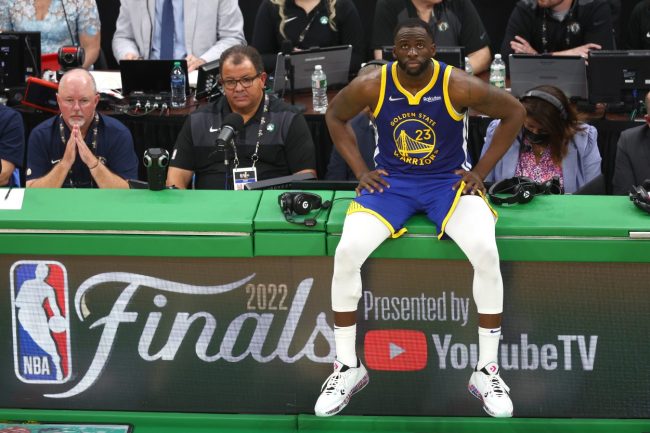 All is well these days with the Golden State Warriors. But a storm may well be brewing on the horizon.

Yes, Golden State just celebrated yet another NBA championship with a memorable parade. Yes, the future looks bright with young stars such as James Wiseman and Jonathan Kuminga. And yes, veterans like Steph Curry, Draymond Green and Andre Iguodala are having the times of their lives at events like the ESPYs.

But eventually, the realities of the NBA’s salary cap rules are going to catch up to a team that’s already paying a ridiculously large luxury tax bill.

The Warriors Are Trapped Between A Rock And Hard Place

Marcus Thompson and Anthony Slater of The Athletic laid bare the difficult situation that the Warriors are about to face in a new report.

While his desire is to remain with the Warriors, Draymond Green is said to be willing to explore outside options to get the contract he wants.

The biggest issue, by far, for Golden State is the future of star forward Draymond Green. Green, a four-time NBA All-Star and former NBA Defensive Player of the Year, isn’t the caliber of player as a Curry or Klay Thompson. But he’s been integral to the team’s dynastic run and is close with both Curry and Thompson.

Green is eligible to sign a four-year, maximum extension on Aug. 3 and according to Thompson and Slater, that’s what he expects Curry also reportedly sees Green as a must-keep part of the team.

Steph Curry would not be happy if the Warriors lost Draymond Green because the team didn’t want to pay him, sources tell @ThompsonScribe and @anthonyVslater.

Curry has a desire for Green and Klay Thompson to be with him for the length of his stay. https://t.co/watYncUTw5 pic.twitter.com/0UNi0mzImq

But if Golden State is to extend him to a maximum contract, it will likely have to let one of Thompson, Andrew Wiggins or rising star Jordan Poole walk in order to avoid an astronomical luxury tax that owner Joe Lacob says is “not even remotely possible.”

The report states that the Warriors don’t plan on offering Green a max contract. It also states that no talks about an extension of any type are currently taking place. It also mentions that the team would prefer to wait until next offseason, when Green will have just one year left on his current deal, to discuss an extension.

How Green handles that could be the key to the Warriors future? Will he look elsewhere? If he does, how will Curry respond?

These are questions that have put Golden State in a bind and could shake up the NBA for the foreseeable future.