Giants RB Saquon Barkley Is More Motivated Than Ever Before 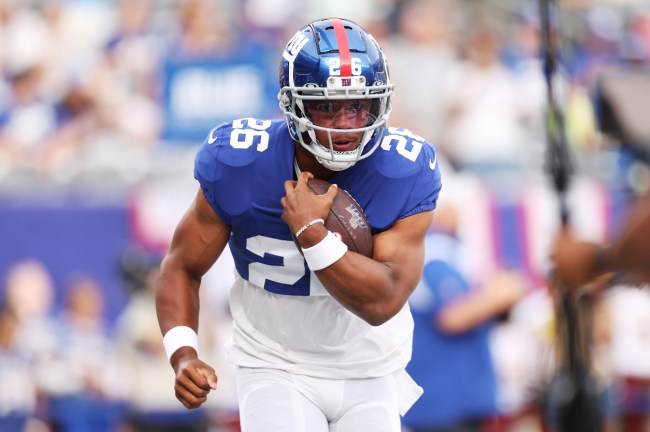 The New York Giants are ready to silence all the doubters. Daniel Jones has a target on his back, and new head coach Brian Daboll has an uphill battle with a shaky roster this season.

Running back Saquon Barkley is back healthy, and that is a terrific sign for the Giants. However, the former Penn State star is ready to show out in 2022, and he is more motivated than he has ever been. Barkley also proceeded to fire a shot at the haters (h/t Michael David Smith of Pro Football Talk).

“People are really counting me out. People are trying to write me off. And I don’t really do it for the pleasure of others or making other people satisfied. I do it because I just want to be great. But now I have that extra motivation, the extra motivation to push me to go out there and kinda just be like you know what, shut everyone up.”

Barkley played 13 games in 2021 and finished with just 593 yards rushing and two scores. The year before, Barkley played just two games, and he hasn’t had a 1,000-yard campaign since 2019.

If he doesn’t get back on track, he could be headed for free agency pretty soon, and Giants fans won’t be too happy after he was expected to be a superstar in the league.