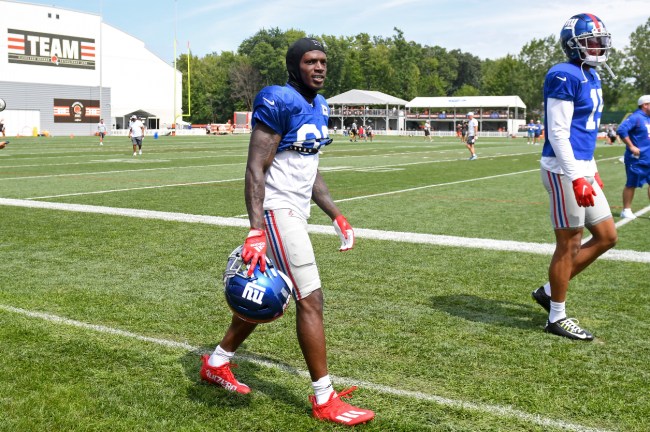 The New York Giants shocked the world by drafting Kadarius Toney in the first round of the 2021 NFL Draft.

The G-Men selected Toney ahead of other wide receivers that are arguably more talented, including Rashod Bateman, Elijah Moore, and Rondale Moore. Najee Harris and Travis Etienne also went a few picks after Toney, although the Giants didn’t seem too interested in drafting another running back.

Toney’s rookie season was underwhelming, and a viral punch against the Dallas Cowboys was the biggest headline the former Florida Gators wideout made all year long.

Toney suffered another injury setback during OTAs and is set to miss more time after a minor knee surgery, which is more bad news for the Giants and their young wide receiver.

As Warren Sharp points out, Toney’s injury history keeps growing, and it’s hard to believe that he has injured just about every part of his body.

Check the dates: All of those have come in his brief NFL career.

The Giants already have plenty of injury-riddled players on the roster, including Saquon Barkley and overpaid wide receiver Kenny Golladay, to name a few.

Toney is expected to become a significant focal point of this offense in 2022. Still, if he can’t overcome injury problems, then the 20th overall selection in 2021 might be another bad choice by the Giants front office.

After the Giants failed to give quarterback Daniel Jones a fifth-year offer, it might be the final chance for the former Duke product to solidify his standing as a starter in the NFL. With Toney on the shelf, Jones’ job will get even more difficult, and things in New York will not get any easier for the new Giants regime.