North Carolina Fans Are Up In Arms After No. 1 Recruit Decommits And Now Appears Headed Elsewhere 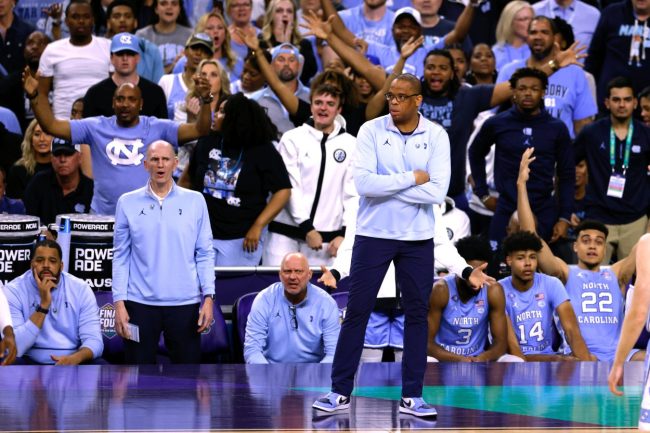 G.G. Jackson is the consensus top overall recruit in the class of 2023. The Columbia, South Carolina product is a 6-foot-8, 210-pound power forward with elite athleticism and and an improving jump shot.

According to 247Sports’ Eric Bossi, Jackson is a remarkably well-rounded player.

“When he’s got an even mix of inside and outside to go along with what he’s able to do running the floor in transition, Jackson is a major problem on the offensive end. Defensively, he’s ahead of the curve as well. He’s got great anticipation, moves well laterally and uses his athleticism to his advantage so that he’s an above average rim protector who can also defend in space if he gets caught on a switch and has to defend a smaller player.”

Jackson gave his commitment to Hubert Davis and the University of North Carolina on April 27. Just about four months later, that’s all changed. With rumors swirling that he will reclassify to the class of 2022, Jackson decommitted on Thursday night and looks set to enroll with his hometown South Carolina Gamecocks.

Jackson has not yet committed to the Gamecocks. Though it seems just a matter of time at this point. The move would be massive for Lamont Paris and the ‘Cocks, who have struggled mightily since making the Final Four under Frank Martin in 2017.

North Carolina fans, meanwhile, were not overly happy with the way everything seems to have gone down.

Now that it’s truly confirmed and official I’m done with the subject. The show goes on. https://t.co/pwuOMYKYlC

If Hubert is a real one he schedules South Carolina next season. Hell I’m sure Mondo would even be happy to play at their place. https://t.co/HtOPNQtXKC

Martin’s birthday is December 17, 2004, making him eligible for the 2023 NBA Draft by just 14 days. But in order to enter he will have had to graduate high school a year prior, which is reportedly a significant reason for the move.